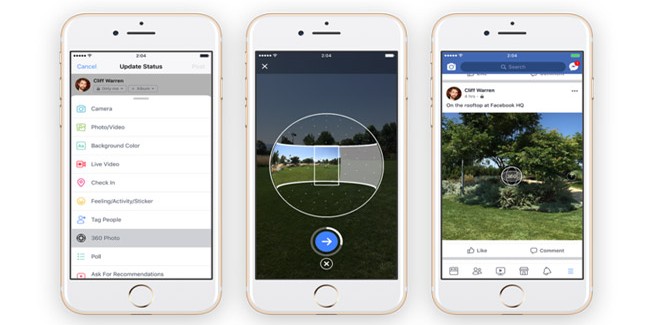 Oculus’ parent company Facebook has been a big supporter of 360-degree photos and videos on its platform for more than a year now, allowing users a unique way to share an immersive view of their world with their friends and family.

Now, the company has started rolling out a new feature that will make it easier for users to share immersive moments on their timeline or albums by adding the ability to capture 360-degree photos directly from within the Facebook app without requiring a third-party app or camera.

Here are Facebook’s simple instructions on how to take 360° photos from within its app on both iOS and Android:

In addition, Facebook has also updated 360-degree photos with some new features, such as allowing you to zoom in on them and tag your friends as well as letting you be able to set them as cover photos on your profile.

Currently, this update only applies to 360-degree photos, so if you want to post 360-degree videos, keep in mind you’ll still need a dedicated camera that can capture panoramic footage like the Samsung Gear 360, Insta360, or 360fly 4K—just to name a few.