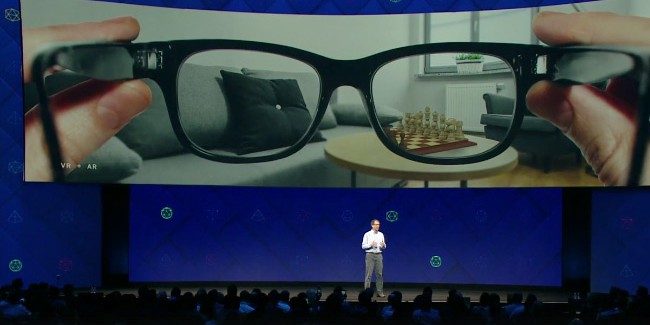 Oculus-parent company Facebook has been working on augmented reality for the past couple of years, but it now appears that a new partnership with Ray-Ban parent company Luxottica aims to help design and develop Facebook’s pair of AR smart glasses to bring it to the consumer market, as reported by CNBC.

According to the report, CNBC cites sources familiar with the project that Facebook’s AR smart glasses, codenamed ‘Orion’, could arrive sometime between 2023 and 2025 and is intended to replace smartphones. The glasses are said to allow users to “take calls, show information to users in a small display,” and even live-stream their point-of-view to friends and followers on social media. Users will be able to input information with the use of a voice-activated AI assistant that the company is currently working on, as well as could possibly utilize a ring-like device, codenamed Agios, which features motion-sensing capabilities that would also effectively serve as a user input for the glasses.

However, in a recent report published by The Information, the Facebook and Luxottica partnership is actually for a far less ambitious pair of smart glasses, which are codenamed ‘Stella’. These glasses are said to be similar to Snap’s Spectacles, allowing users to record video of their surroundings with the help of built-in cameras to the frame. If so, ‘Stella’ would likely launch first to consumers before the far more advanced ‘Orion’ AR smart glasses are available.

For now, no specific details are officially announced, but it sounds like Oculus’ parent-company Facebook is serious about delivering an AR glasses product that consumers embrace and would be comfortable using in their daily lives.