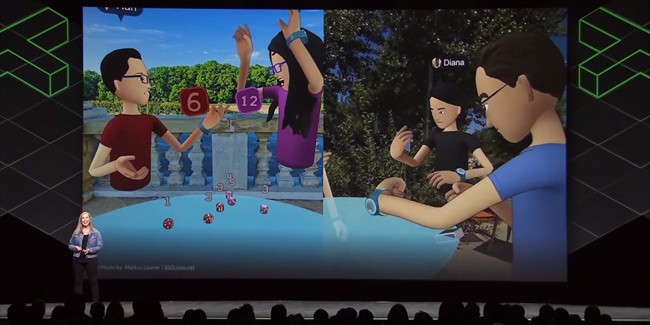 Facebook announced during the recent Oculus Connect 4 keynote, that its social VR app, Facebook Spaces, is getting some new features and improvements that will make the app a lot more engaging and social for users.

According to Facebook’s Rachel Franklin, Head of Social VR, users will be able to create their own toys and props from their Facebook photos using a new cut out tool, play minigames with friends, like cards and dice, as well as be able to combine a variety of items in Spaces to make their very own ‘Kits’, similar to a virtual toy chest, that can be saved to access later or shared with friends.

Spaces will also let users stream full 360-degree video directly from within the app in real-time. The feature, rolling out later this year, will allow users to share moments and explore Facebook’s library of 360-degree video content together with their friends and family in Spaces.

Facebook also announced that users will be able to illustrate within Spaces using Oculus’ Quill, a powerful VR art tool that was used to create the critically-acclaimed VR short film, Dear Angelica.

Additionally, Franklin also revealed what Facebook calls ‘3D Posts’, which are essentially interactive 3D objects that can be created in VR using the new creative tools in Spaces, and then shared directly to Facebook’s regular news feed. So, even friends and family who are not using a VR headset can still see and interact with these 3D posts easily from their desktops and smartphone.

All these new features are part of Facebook’s plan to make Spaces a social VR destination for people to contribute creativity, share meaningful moments, and immerse themselves in a unique virtual experience with each other.