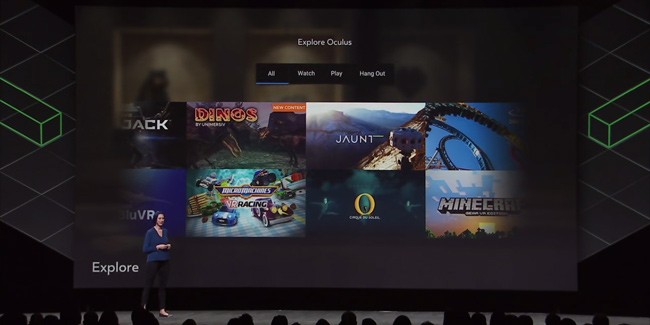 During the Oculus Connect 4 opening keynote on Wednesday, Oculus announced that it’s opening up the Explore API to all Gear VR developers, enabling devs to promote and boost awareness of their games and apps through the new Oculus Explore section.

Product manager at Oculus, Christina Womack, described the new Explore section as a personalized feed of recommended apps and experiences that match to each individual user’s interest, offering a helpful way to discover new, exciting VR content on the platform.

By using the Explore API, a developer can create ‘Stories’ around their game or app. These can be used to announce new content, features, levels, and game modes, as well as deep-link to specific videos or experiences within an app. Stories can also be used to notify users of time-sensitive events like daily challenges, tournaments, and live concerts.

Currently, the Explore section and its API is only available for Gear VR, however, Womack noted that both will also be released for the Oculus Rift in 2018.