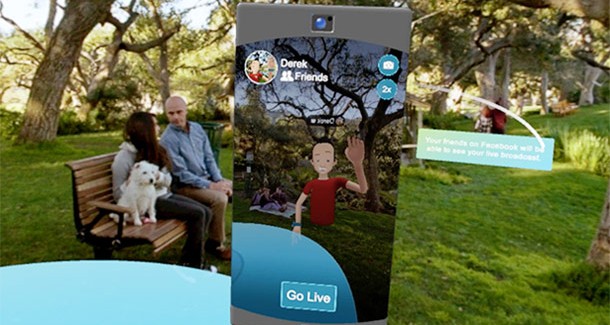 Earlier this year, Facebook launched Spaces, a social VR app for the Oculus platform that lets you and your Facebook friends hang out and interact with each other in virtual reality. Now, the company has announced that Spaces is getting a new feature added that will allow Oculus Rift users to broadcast themselves live directly from within the app.

With the new live streaming functionality available starting today, users will be able to share moments and experiences with friends and family on Facebook in a whole new and exciting way—giving the people on the outside of virtual reality a view into your virtual world and engage with them in real-time.

“Facebook Live is already one of the most immediate and interactive ways to share moments with friends,” says Mike Booth, head of product management for Facebook Spaces in a blog post. “By going live from Facebook Spaces, you can share a whole new kind of moment with friends and family directly from VR. Whether you’re touring exotic locations across the globe in 360, collaborating on a virtual marker masterpiece, or riffing on a viral video, the people who matter most to you can now follow along in real time on Facebook.”

When users go live on Facebook Spaces, they’ll have a “virtual camera” that can be positioned anywhere in the scene to capture their immersive experience. Facebook friends watching the broadcast will be able to comment, ask questions and react with emojis during live sessions—all of which you will be able to see in virtual reality. You’ll even have the option to grab and move comments around as physical objects in VR, while also highlighting the ones you find interesting and compelling for everyone watching to see.

Facebook Spaces is available now in beta as a free download on the Oculus Store. Be sure to check it out and start your first live broadcast from VR today.