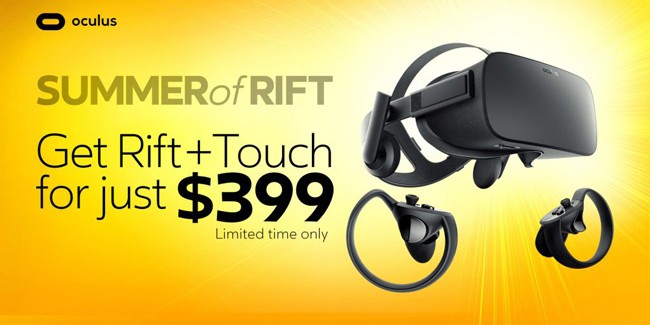 If you’ve been looking to jump into virtual reality, now is a perfect time to buy. Oculus has announced that starting today for a “limited time” the Oculus Rift headset and Touch controller bundle will cost just $399, which is a significant price cut compared to its regular $598 price tag.

The temporary price drop is only being offered for the next six weeks as part of Oculus’ ongoing ‘Summer of Rift‘ promotional event, which also includes big discounts across a wide selection of Rift and Gear VR game titles.

The total bundle includes the Rift headset, a pair of Touch controllers, an Xbox One wireless controller, a remote, 2x sensors, and all the necessary cables. On top of that, you’ll also get access to seven VR titles for free with your bundle purchase, including Lucky’s Tale, Medium, Toybox, Quill, Dead and Buried, Dragon Front, and Robo Recall.

Back in March, Oculus had permanently reduced the price of its Oculus Rift and Touch controller bundle from $798 to $598 in an effort to make “PC VR as affordable as possible,” and now with the summer sale underway that’s another $200 slashed off the retail price in just this year alone. While even though the new price drop is for a limited time only, the discount is a much-welcomed one that will certainly help attract new consumers to the Oculus platform.

Of course, it’s important to note that you’ll still need to make sure you have a relatively beefy PC with a high-end graphics card that can support VR in order to get the most out of your Oculus Rift experience.

The recommended specs include an Intel i5-4590 equivalent or greater with at least 8GB of RAM and an NVIDIA GTX 1060/AMD Radeon RX 480 GPU. However, at the minimum, a dual-core Intel Core i3 processor and an NVIDIA GTX 960 graphics card or equivalent will be capable enough to power the Rift.

There’s no better time to get into virtual reality than now—especially for just $399! So, for anyone looking to take advantage of this incredible Oculus Rift and Touch bundle offer, you can do so now while the deal lasts via the company’s official website.