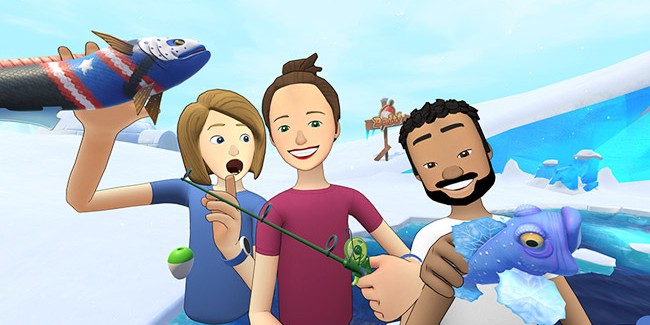 Back in April, Facebook launched the beta of its social VR app, Facebook Spaces, and since its release the company has been hard at work to make the experience much more social and engaging for users. Now, as part of a new update, a mini-game dubbed Bait! Arctic Open was finally added to Spaces with more social mini-games soon to come.

Bait! in Spaces is considered to be “an early experiment” by the company, but the team hopes the experience for users will highlight the potential future of social VR. “This is only the beginning”, said Facebook Spaces Head of Product Mike Booth in an official Oculus blog post. “Experiments like this are helping us learn what’s possible to build in Spaces, what works, what doesn’t, and what tools will empower developers to bring great ideas to life.”

“Fishing has always been at its most fun when done with friends, and thanks to Facebook Spaces, we’re able to bring the social side of fishing to a virtual environment,” said Tommy Palm, CEO and co-founder of Resolution Games in an official statement. “Facebook Spaces has made incredible leaps when it comes to social engagement feeling genuine within VR. This makes experiences like Bait! that much more amazing to share with friends and family.”

Oculus Introduces Three ‘Complete Your Collection’ Packs for the Rift