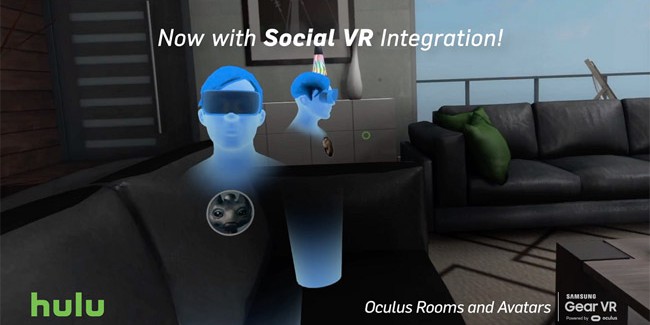 Hulu has announced a major update to its official virtual reality app for both the Oculus Rift and Gear VR that will make your video streaming experience much more social in VR.

The new Hulu VR update now adds support for Oculus Rooms, which will allow users to meet up with other friends in virtual hangout spaces and watch Hulu’s entire library of premium content together on a large virtual screen. Users will get to enjoy immersive 360-degree videos offered for free or the latest episodes of their favorite TV shows and movies featured to those with a Hulu subscription. A user can also switch between a variety of virtual environments like a comfortable living room setting, a sandy beach, or big screen cinema theater.

In addition, on the Rift, the app integrates support for Oculus Avatars and Oculus Touch motion controllers so users can use their virtual hands to navigate menus, interact with objects and friends all while enjoying Hulu’s streaming content in VR for an even better social and immersive experience.

Check out the video below highlighting the new Hulu VR features with Oculus Rooms, Avatars, and Touch support: