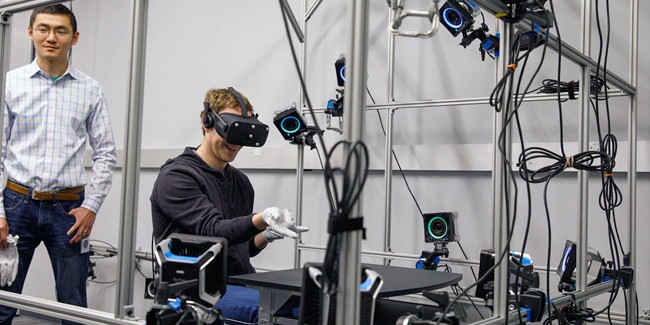 Facebook CEO Mark Zuckerberg recently visited the Oculus Research lab in Redmond, Washington, where a team led by chief scientist Michael Abrash works on next-generation hardware. Zuckerberg shared a glimpse into the facility, including some upcoming new tech being developed. Most notably, was a pair of prototype VR gloves.

“We’re working on new ways to bring your hands in virtual and augmented reality,” Zuckerberg wrote in a Facebook post. “Wearing these gloves, you can draw, type on a virtual keyboard, and even shoot webs like Spider-Man. That’s what I’m doing here.”

Zuckerberg further explained that the goal of the Oculus Research team is “to make VR and AR what we all want it to be: glasses small enough to take anywhere, software that lets you experience anything, and technology that lets you interact with the virtual world just like you do with the physical one.”

In the photo above, the setup to test the prototype gloves appears to use an array of OptiTrack Prime 17W motion capture cameras to track the gloves’ position. This third-party sensor is state-of-the-art and significantly more expensive than Oculus’ own tracking cameras used for the consumer Rift.

It’s also worth noting that back in July 2015, Oculus acquired Israel-based Pebbles Interfaces, a company that specialized in developing hand tracking technology via “custom optics, sensor systems, and algorithms.”

Whether or not Oculus will actually release a consumer pair of trackable VR gloves with haptic feedback is yet to be seen, however, it’s good to know the company is looking towards new ways of immersive input methods for the Rift.