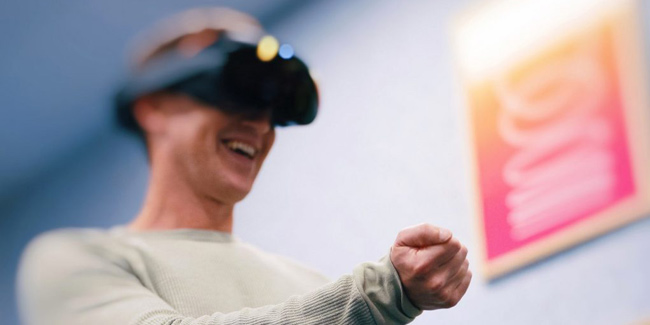 In a video posted on Facebook, Zuckerberg is seen wearing the new, highly-anticipated headset blurred in the clip and demoing a mixed reality experience called The World Beyond. Built using Meta’s Presence Platform, a tool designed to help developers create immersive mixed reality experiences, the demo utilizes Cambria’s advanced onboard camera sensors and full-color passthrough technology to blend the physical and virtual world together.

The “full-color passthrough version” of The World Beyond will only be available on Project Cambria, Zuckerberg says; however, Quest 2 users will be able to experience a simplified grayscale version of the demo soon via the App Lab.

Meta also posted a two-and-a-half-minute overview video of its Presence Platform, which highlights some of Project Cambria’s full-color passthrough capabilities in action. Check out Meta’s Presence Platform video below:

While Meta has yet to provide pricing details or an official release date, the new headset is said to cost “significantly higher” than $800 and is due to launch sometime later this year. Cambria is one of four new headsets expected to be coming from Meta. Recent reports suggest the company plans to release the other three headset models by 2024.