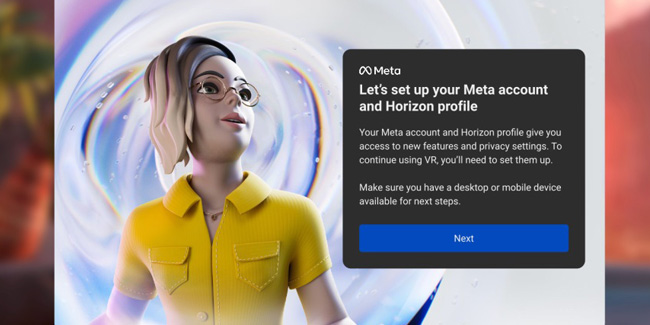 Meta is finally reversing course on its controversial requirement for users of its virtual reality headsets to log in with a Facebook account. Instead, users will need to create a new Meta account that the company will begin rolling out next month in August 2022 to access their VR devices.

According to Meta, the new account system will provide users “more flexibility and control in VR” as it no longer requires users to set up their VR headsets with a Facebook account. It also allows users who may have previously merged their Oculus account with the social network platform to remove it entirely if they so choose.

Meta is making it a point to emphasize that the new Meta accounts are not social profiles; but rather are a way for users to log into their VR devices and let them view and manage any purchased apps in one place. As noted in Meta’s latest blog post, once a user creates a new Meta account, users will then be prompted to create a Meta Horizon profile, formerly known as the Oculus profile. With the new Meta Horizon profiles, users can choose how they want to appear to others by customizing their username, display name, profile picture, avatar, and other information they may want to share. This will represent a user’s social presence in VR and across “other surfaces, like the web.”

While it’s not required, users will still have the option of connecting their Meta account to Facebook and Instagram to unlock “connected experiences,” such as finding their followers on Instagram to play games with in VR or simply chatting with Facebook friends on Messenger. In fact, instead of friends, the company says it’s shifting away from its current ‘Friends’ model to a new ‘Followers’ structure, a move made to become similar to Instagram’s existing model.

As for privacy controls, a new menu with three privacy options will guide users through which setting is the best fit: ‘Open to Everyone’, ‘Friends and Family’, and ‘Solo’. A user also has the option to set their Horizon profiles to private, so they can manually approve any follower request. In private mode, only approved followers can view who a user follows and who chooses to follow them. However, basic details like a user’s profile picture, username, display name, avatar, follower count, and the number of people followed are still visible to any non-followers on the platform.

While those who are new to Meta VR devices or have previously merged an Oculus account with their Facebook account need to create a Meta account and Horizon profile starting in August, the company notes that any users who currently still log into their VR device with an Oculus account can continue to do so until January 1st, 2023. After that cut-off date, they must transition to a new Meta account and Horizon profile to continue using their Meta VR device.