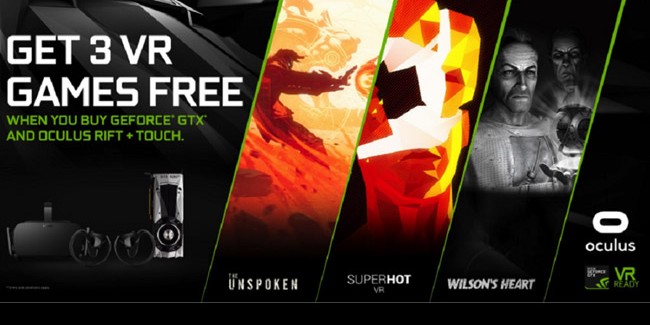 Nvidia and Oculus have teamed up once again to launch their newest promotional offer aimed to entice prospective buyers looking to jump into the world of high-end virtual reality gaming on the Oculus Rift platform.

Now for a limited-time, when you purchase an Oculus Rift headset and a pair of Touch controllers alongside an Nvidia GeForce GTX 1080 Ti, GTX 1080, GTX 1070, or GTX 1060 graphics card, or a PC/laptop equipped with any one of those qualifying GPUs, you will get three VR games for free—The Unspoken, SUPERHOT VR, and Wilson’s Heart.

Keep in mind, that you will need to purchase through one of Nvidia’s participating retail partners in order to be eligible for the free games. Currently, only Amazon and Newegg are listed, but other vendors may possibly be added later on, so be sure to check Nvidia’s website here to see the official list of all participating partners in your region.

If you’re thinking about getting an Oculus Rift then this deal makes it a great time to upgrade your PC with a new VR-Ready Nvidia GPU, so you can take full advantage of the free games and experience some of the best VR content available on the platform right now. This limited-time offer is available now through June 13th, 2017.