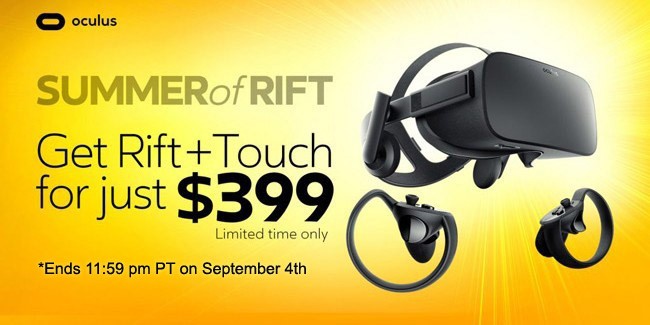 Oculus’ biggest summer sales event of the year is coming close to an end as the Oculus Rift and Touch bundle officially will go back up from $399 to its standard retail price of $499 when it’s all over at 11:59 pm PT on September 4th.

This has easily been one of Oculus’ most popular promotional events of the year, which started out as a six-week seasonal sale and was extended by an additional two weeks to keep up with demand. Now, Oculus is making sure it ends its ‘Summer of Rift’ sales event in a big way and has announced that it’s kicking off a huge flash sale on the Oculus Store throughout this labor day weekend for users to take advantage of on both the Rift and Gear VR.

Some of the Rift highlights of this limited-time sale include a wide range of apps and experiences, such as Star Trek: Bridge Crew, Virtual Desktop, Chernobyl VR Project, TECHNOLUST, just to name a few.

There are also two awesome bundles for those looking to get the best bang for their buck with this year’s collection of the most popular Summer titles. The Rift Summer Hits Pack and the Essentials Pack, which are both priced at $89.99 (a 35% discount) and $59.99 (a 52% discount) respectively offer something exciting for everyone.

In addition, Gear VR owners aren’t left out and will see some great sales on the mobile side too, such as Ocean Rift, Drop Dead, Esper 2, Keep Talking and Nobody Explodes, and Tactera all available with discounts of up to 50% off.

If you still haven’t purchased a Rift+Touch bundle or just looking to add some new content to your Oculus game library, then there is no better time than right now. You only have a few days left to get in on the sale while it lasts.