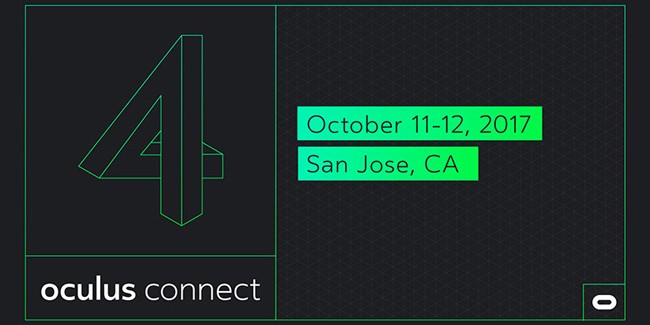 Oculus Connect 4 will be a two-day event filled with an exciting lineup of keynote speakers, tech talks, hands-on demos, and special guests. While Oculus did not share any other specific details about OC4 at this time, the company says we can expect more information revealed soon in the coming months ahead. For now, you can sign up at the official Connect website to get updated on what’s coming to OC4 this year.

Oculus Connect remains the company’s much-anticipated event of the year, and we expect some big announcements to be made at the OC4 event, especially considering that Oculus did not have an official presence at E3 last week.

“OC4 is the place to explore groundbreaking new VR applications and technology that capture the world’s imagination and push the industry forward,” the company wrote in a blog post.

Last year, the company unveiled the ‘Santa Cruz’ prototype standalone headset—as well as, new developments in VR software and content for the Oculus platform. It’s likely we’ll hear more about the ‘Santa Cruz’ prototype at Oculus Connect 4, and hopefully, the company is ready to show off a newer version of its standalone headset that brings it closer to consumer-ready.

It’s still early, so no details on OC4 registration or full schedules have been released yet, but we’ll be sure to keep you updated. Stay tuned!