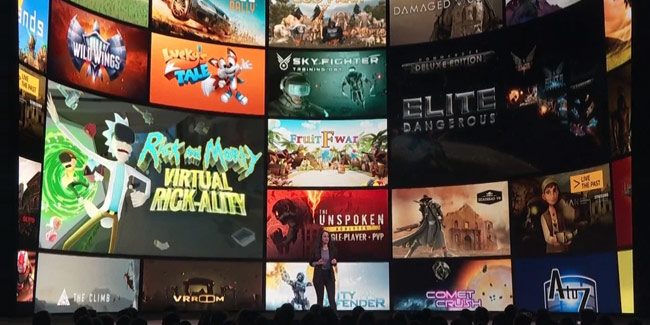 At OC5, Oculus announced that its new standalone VR headset, Oculus Quest, will have more than 50 titles available when it launches in Spring 2019 for $399. While the full list of titles has not been confirmed yet, the company did hint at some games in the works, including existing Rift titles like Robo Recall, The Climb, and Moss coming to Quest.

In addition, the company announced during its keynote an impressive lineup of new titles that will be coming to the Oculus platform, adding to its growing library of immersive games and experiences.

Jack and Liv are back in the highly anticipated sequel to the groundbreaking zero-g adventure from Ready At Dawn and Oculus Studios. Return to the rings of Saturn on a journey that takes you deeper into the mysteries of space—past the very boundaries of time itself. Venture beyond the unknown in Lone Echo II.

Become the ultimate superspy in VR. Engage in undercover espionage, intense interrogations, and lethal hand-to-hand combat. Faceoff against death-defying challenges around the world—from aerial escapes at 30,000 feet to pulse-pounding rooftop chases in India.

Deploy every gadget and weapon in your arsenal to bring down enemies, from smart bombs to cybernetic gauntlets. Branching-path gameplay leads to mission success… or a fate worse than death. Will you go in guns blazing or take the stealth route? Risk everything. Fear nothing.

Vader Immortal: Episode I, from ILMxLAB

Vader Immortal: Episode I—the first in a three-part series—is a new story in the Stars Wars universe that takes place between Revenge of the Sith and A New Hope. In Vader Immortal, players will get to enter Darth Vader’s palace on Mustafar and interact with one of the most iconic villains of all time.

Take command and pilot a giant fighting machine in an escalating war between powerful corporations. Select your GDR (“Grinder”) chassis and customize it with a powerful arsenal of lasers, missiles, cannons and more as you’re pitted against rival Grinder squads. Engage in seamless multiplayer action with no loot-box or micro-transaction nonsense. Vox Machinae respects your time, and your wallet.

Final Assault, a WWII-themed RTS game from developer Phaser Lock Interactive. This fast-paced RTS experience is built from the ground up for VR and gets commanders straight into the action managing and deploying resources without base-building and resource gathering.

The Tempest shattered your android body. Journey through an ever-changing cloudscape to augment yourself and save your friends. Explore an expansive world with complete freedom—bound up cliffs, glide across chasms, and fly through the slipstream with velocity. Detonate explosives, harness electricity, and wield makeshift weapons to overcome titanium sentries and monolithic guardians. Play single-player, or explore forgotten ruins together.

Echo Combat, from Ready At Dawn

Echo Combat is Ready At Dawn’s highly-anticipated expansion to the newly renamed Echo VR. In Echo Combat, you will play as a futuristic battle-ready robot armed with an array of weapons and abilities as your team of three competes against the opposition in high-speed objective-based zero-gravity mayhem.

Space Junkies is a visceral, jetpack-fueled VR Arcade Shooter where you fly through deadly Orbital Arenas in hostile space, facing off in extreme battles! The game enters its second Closed Beta starting 9/26-10/1.

Other “Rift quality” titles revealed at OC5 to be ported to Oculus Quest, include Superhot VR, Dead & Buried, as well as new experiences like Face Your Fears 2, and Tennis Scramble. With all the titles coming down the pipeline, it certainly looks like its going to be a good year ahead for gaming across both Rift and Quest.