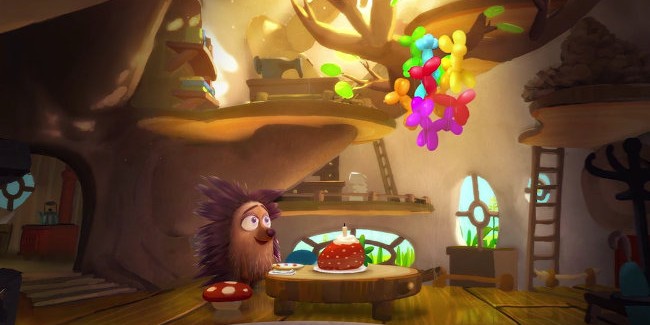 Oculus announced its second VR film, Henry, which is the latest project produced by Oculus Story Studio, the company’s in-house cinema division. The animated film is directed by Ramiro Lopez Dau, who is known for his work on Pixar films like Brave and Monster’s University.

Henry is described as “a heartwarming comedy about a lovable hedgehog,” who simply likes to hug people, but sadly his pointy spikes scares everyone away. The story takes place in Henry’s home on his lonely birthday, where he makes a wish for some friends with which to celebrate.

As an original character developed for virtual reality, Henry the hedgehog was created by Kendal Cronkhite, Story Studio’s new consulting production designer, who designed the look of Dreamworks’ Madagascar films, along with Bernhard Haux, previously a top character artist at Pixar.

With Henry, the creators are hoping to deliver an immersive experience that truly captures a genuine, and emotional connection between the character, and the viewer through the power of VR storytelling.

“Henry is our second movie, but it’s really our first character in virtual reality,” said Oculus Story Studio producer Edward Saatchi. “We’ve noticed that he’s starting to feel more like a friend. I want to hug him.”

The film is set to premiere on July 28th at a special event in Hollywood, CA., and will also become available for free to all Oculus Rift owners when the consumer version of the Rift ships sometime in Q1 2016.

For more information about Henry check out the official site.