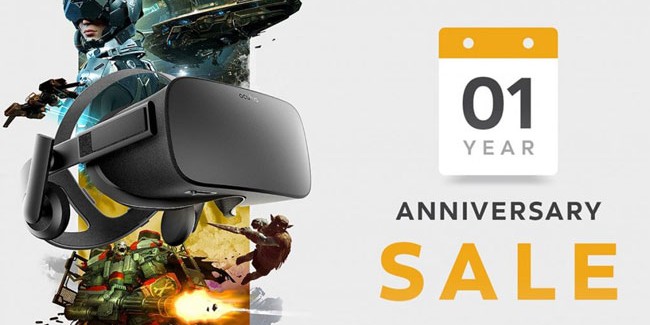 A year ago today, Oculus officially launched the first consumer version of its Rift virtual reality headset to the public. Now, to celebrate the marking of its one-year anniversary, the company is offering a huge sale on a wide range of popular VR titles now through April 4th on the Oculus Store.

The Rift Anniversary Sale includes more than 30 titles with up to 80% off and there is also a special discounted bundle that features 11 titles for only $89.99, which comes out to a combined total of 66% off the regular retail price.

The special, limited-time bundle includes the following lineup of titles that pioneered the launch of PC VR:

In addition to the bundle, Oculus is offering deep discounts on over 30 individual titles on the Oculus Store, including EVE: Valkyrie which is currently available at 50% off, as well as Project CARS, Chronos and Keep Talking and Nobody Explodes each marked down 45% off the price or more. These are just a few of the awesome titles you can choose from to build your collection of games for the Oculus platform.

Whether you are a current Rift owner or you’re considering finally becoming one thanks to the recent $200 price drop of the Oculus Rift headset and Touch bundle, there is no doubt that now is the perfect time for anyone looking to take advantage of these amazing discounted offers.