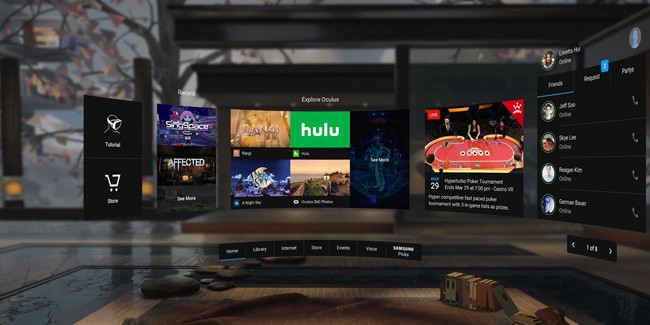 Samsung and Oculus have announced some major changes to the Gear VR mobile headset. The latest iteration not only features a new and much-needed motion controller, but also a completely revamped Oculus Home experience that brings a significant performance boost to the mobile platform.

According to an official Oculus blog post, the company is excited to begin rolling out its “biggest mobile platform update” to date to all Gear VR owners over the next coming weeks ahead.

“Today, we’re beginning to roll out our biggest mobile platform update yet. We’ve rebuilt Oculus Home from the ground up, reducing load times by up to 3x! That gets you into VR faster, while our new Explore feature makes it easy to find great content and play videos in VR. Plus, we’ve brought unprecedented graphic clarity to mobile VR, with twice the pixel resolution in Home—think of it like upgrading from Standard Definition to High Definition.”

The new 2017 Gear VR headset will be released on April 21st priced at $129 and will come bundled with the new Gear VR controller. You’ll also be able to purchase the new controller separately for just $39, which is compatible with older models of the Gear VR. According to Oculus, there will be 70 new titles that support the controller coming soon, with nearly 20 titles to choose from in April, and 50 more to follow over the next few months.

Oculus Avatars is also making its way to the Gear VR for the first time as part of the new Home update. Now, Gear VR users will be able to create an avatar and customize their own identity by choosing from a wide range of facial features, hairstyles, eyewear, clothing, and hats. Users can even carry over their avatar to the Oculus Rift, providing a seamless and consistent identity across both Oculus-powered headsets.

One of the other big features of this new update is the built-in VR web browser that is accessible directly from Oculus Home. The new Oculus Browser browser allows users to easily navigate the web and is optimized to render incredibly sharp video, images, and text in Gear VR, as well as supports 360-degree video content.

All of this comes as Oculus continues to expand upon its 700+ library of immersive mobile content for the Gear VR available on the Oculus Store.