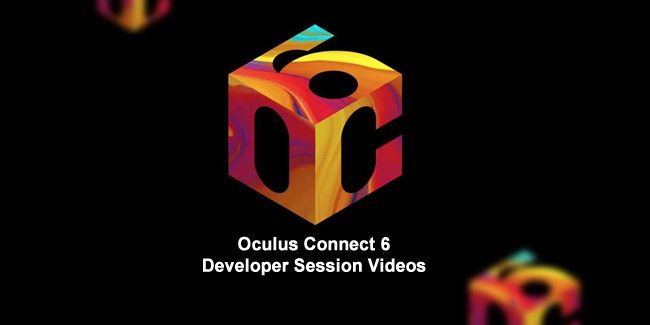 Oculus’ sixth annual developer conference, OC6, took place earlier this week at the San Jose McEnery Convention Center, where developers and AR/VR enthusiasts from around the world gathered for the two-day event to share their passion for immersive technology and discuss the latest innovative ideas to help push the AR/VR industry forward.

In case you missed it, Oculus released a series of developer session videos from this year’s Oculus Connect (OC6), which offers in-depth technical insight and thought-provoking discussions into building and shaping the future of augmented and virtual reality. See also: Oculus Connect 6 Developer Sessions – Part 1

Technological Tethers: How AR+VR Connect Us to the World

‘From dystopian futures to escapist fantasies, the possibilities of virtual and augmented reality are often misrepresented or misunderstood. In this session, we’ll explore how these technologies actually deepen our connection to the world around us.’

Designing for Emotion: The Space Where Storytelling and Games Meet

‘How are storytellers and game designers converging to evoke specific emotions in VR? Learn about the perfect blend between agency and narrative, mechanics that motivate audiences through emotion, and connect them to characters. The lines between stories and games continue to blur.’

Designing Research to Measure the Impact of VR

‘Enterprise VR continues to make waves and prove results as innovative companies leverage the technology for training, collaboration, design, and much more. The logistics of scaling this powerful tech can be daunting, but our solution can help. Join the Enterprise product team as they give you a first look at Oculus for Business, which will help companies deploy VR in a new professional, more secure, and scalable way.’

Improving AR/VR Experiences through the Study of Visual Perception

‘Learn how to use the study of physical stimuli and the sensations and perceptions they produce, to improve content and experience design.’

‘In this session, we’ll cover the latest updates to the Oculus platform for developers of social and multiplayer apps, including new features to help people discover your app and connect with others, tools to help you improve social presence and deliver it at scale, and best practices for bringing people together in VR.’

‘Learn how to stop maintaining multiple versions of your application and let the runtime do the porting for you by taking advantage of the new OpenXR plugin in UE4.’

‘Hear from two core members of the Oculus UX Research Team, as they discuss the significance of carrying women’s voices through the development of products that are primarily designed for male users. Gain valuable insights learned directly from women’s research studies, both on integrity features and hardware products.’

‘How can you succeed on the Oculus Store? Join us for a look at the quantitative and qualitative data that show which features are most likely to improve performance and meaningfully improve your app’s conversion rate.’

Build for Reach: Get Started in Spark AR Studio

‘Discover just how quickly and easily you can use existing pipelines to build a range of sophisticated AR experiences, then publish them for an audience of billions. We’ll look at asset prep and import, scene setup, logic, and publishing to get you up to speed in no time.’

‘Your identity is an integral part of how you experience any social space. Using years of research from Facebook and Oculus, we will explain what makes a strong identity in Social VR. We will share what users want to express about their identities, and provide guidelines on building features that facilitate safe and meaningful social interactions.’

‘Getting music to fit naturally into your AR/VR experience isn’t easy. Facebook Sound Design Team members will share different ways of spatially placing your score, along with techniques used writing and recording the scores for Oculus First Steps and other projects.’

The More Things Change: How Trends in VR Apply to Quest

‘VR is uncharted territory where a growing percentage of developers have found success. As the user base grows, so do the opportunities! What are the key factors that can help ensure success? Join us as we explore key insights learned alongside our closest partners over the past few years. Oculus Quest completes the first generation of Oculus hardware and represents a new market for VR content. We’ll look at the different customer preferences for content on Quest compared to Rift and Oculus Go—and talk about how we expect VR content to evolve in the next few years.’

‘One of the biggest challenges to VR adoption is the ability to share its power and excitement with those who don’t have a headset in a scalable way. This presentation will describe how to add mixed reality capture support to your Quest applications, as well as important considerations to bear in mind. It will also introduce our updated camera calibration and capture workflows that are designed for developers, streamers, and influencers.’

Safety By Design: How to Bake Safety and People into Product Development

‘Online abuse—like bullying and harassment—isn’t new, but VR brings a whole new set of immersive and visceral abuse vectors that require bespoke responses from platforms and developers. Protecting users from abuse is especially important for vulnerable groups, including women and people of color. This session will explore how various VR developers are thinking about and tackling user safety—both proactively and reactively—to help build safer experiences. You’ll hear from product and community managers on how they bake safety by design into their products and work with their communities to create safe and welcoming cultures.’

‘With the goal of creating one of the nation’s first career-connected curricula for VR Creation, public high schools, researchers, and industry have partnered to establish a pipeline for future AR/VR developers – beginning in high school and leading to college or professional opportunities. This panel will dive into what it takes to develop such a VR curriculum, how it can support multi-disciplinary skills, the challenges encountered, how they were solved, and best practices for bringing similar programs to your community.’

‘We go deeper into hand-tracking technology and interaction design as well as share early learnings from our partners about developing with hands-on Quest.’

‘Programmers Dr. Luke Thompson and Mark Schramm take you on a (mostly) chronological journey to get their award-winning VR game running on a standalone HMD, and making it the best version to date. This talk will include the technical hurdles, triumphs, hints, tips, and mistakes made while developing SUPERHOT, along with the larger lessons learned about how best to develop for Quest — whether porting or starting from scratch.’

‘Facebook’s mission is to give people the power to build community and bring the world closer together. VR offers unique opportunities to connect people through social VR apps. Hear from AR/VR Experiences leadership at Facebook about building for the future of social VR.’