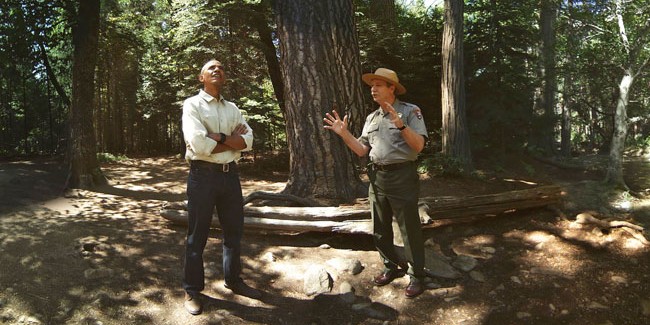 To celebrate the 100th anniversary of America’s National Parks Service, you can now embark on a VR trip through Yosemite National Park with the President of the United States Barack Obama from the comfort of your own home. This becomes the first time a sitting U.S. President is featured in a virtual reality experience.

The 10-minute 360° short film, Through the Ages: President Obama Celebrates America’s National Parks, will take you on an immersive journey with the President and his family through one of America’s most scenic and natural treasures while letting you explore the awe-inspiring nature that surrounds you. The film was shot by virtual reality filmmakers Felix & Paul and created in collaboration with Oculus and National Geographic.

“National Geographic has been a pioneer in visual storytelling throughout its 128-year history,” said Rajiv Mody, Vice President of Social Media for National Geographic in an official press release. “We see virtual reality as a new frontier and are thrilled to use this powerful medium to help celebrate the National Park Service’s centennial anniversary.”

Félix Lajeunesse, Co-founder of Felix & Paul Studios, also is quoted as stating: “As filmmakers, we wanted to use cinematic virtual reality’s unique transportive power to bring audiences into a journey with President Obama where they could experience firsthand the vertiginous, lyrical, and timeless beauty of Yosemite.

“We were deeply inspired by the idea that American national parks such as Yosemite were originally established ‘for all people for all times,’ as a way to allow future generations to experience the extraordinary and untouched beauty and richness of these natural wonders.”

Through the Ages is available now for the Gear VR for free, and will arrive soon on the Oculus Rift.