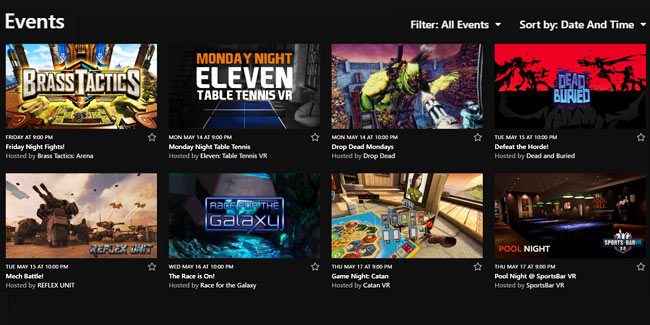 Oculus announced that its Rift SI version 1.26 has started rolling out to its Public Test channel, which is an opt-in pre-release version of the Oculus software for users to test ahead of the full public rollout.

Aside from the usual performance and stability improvements, the latest Rift SI version 1.26 now brings ‘Events’ to the Rift. This new feature allows users to discover and join public events that are taking place across the Oculus platform—such as multiplayer games and tournaments, social gatherings, tech talks, and more.

Below are the full change notes for the Rift SI version 1.26:

Hosted events by Bigscreen, AltSpaceVR, Catan VR, Eleven: Table Tennis, and Brass Tactics are just a few of the VR titles that will be showcased in Oculus Home for Rift users to participate in over the coming month.