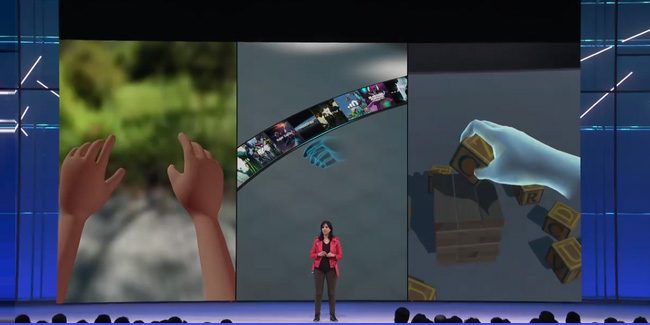 At Facebook’s F8 developer conference this week, Oculus shared a glimpse at some of the work being done internally on advanced hand-tracking, powered by artificial intelligence (AI) that can track and learn to recognize hand patterns in real-time to bring more precise and intuitive interaction to virtual reality.

According to Fernandez Guajardo, this advanced tracking technology is capable of producing “far more accurate than any method before for tracking a single hand, two hands, and hand-object interactions.”

In order for this method to work the company used a marker-based motion capture system to record and collect the data from hand movements and complex interactions, which is then simplified into a 2D image and passed through a convolutional neural network called ‘deep marker labeling’. The self-learning AI algorithm can then utilize this data to identify the position of markers across a vast array of ‘labeled hand poses’ to effectively track and produce the natural motion of the hand and finger articulation with higher accuracy and better immersion in a virtual environment.

Oculus believes that leveraging techniques from machine learning allows its new method of hand-tracking to be far more accurate than any other method that has come before it. The company claims to have achieved an impressive 100% success rate when it comes to single hand-tracking, 99.29% success rate in two-hand tracking, and a 98.26% success rate in hand-object tracking. As shown in the graph above, both two-handed and hand-to-object tracking shows a significant leap compared to other method solutions.

In addition to hand-tracking, other major advancements that the company teased at F8 include a new prototype headset, codenamed ‘Half Dome’, with a 140-degree field of view and varifocal display, as well as advances in the 3D reconstruction of rooms and environments, photorealistic avatars animated in real-time, among other innovations.

There is no word on when we may see these types of new technologies trickle down to a consumer product, but it’s clear that Oculus is making a lot of progress with its research and development to bring the future to the present.