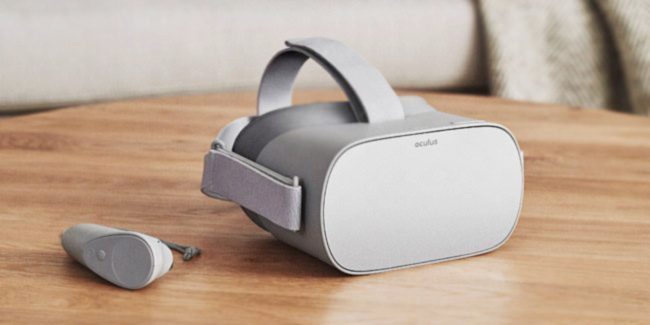 Oculus-parent company Facebook has announced that it has permanently cut the price of its entry-level standalone VR headset, the Oculus Go, to just $149 for the 32GB version and $199 for the 64GB version.

Facebook confirmed the new pricing with UploadVR, stating that the $50 price cut of the Oculus Go is officially permanent and that “comparable discounts” are now rolling out to all countries where Oculus Go is sold. You can see the price drop on Amazon, Best Buy, and the Oculus Store, with other retail partners expected to follow.

The Oculus Go was the company’s first standalone VR headset, designed to deliver the easiest and most cost-effective way for users to jump into VR. The Go offers head tracking limited to only three degrees of freedom (3DoF) and comes bundled with a single controller, which provides casual users with a basic VR experience that is geared more towards media consumption and simple games. For those looking for a more advanced, standalone virtual reality headset that offers full positional tracking, then you should consider a $399 Oculus Quest instead. While the price is more on the expensive side compared to the Go, the Quest provides a much more immersive VR experience with six degrees of freedom (6DoF) and far better performance to support higher-quality games and applications.

At a $149, however, the Oculus Go is a pretty good bargain regardless of its limitations. It can be a perfect inexpensive entry-level headset for someone just looking for a dedicated media device to watch 360-degree videos and stream content on YouTube, Netflix, and Hulu, as well as some light casual gaming.