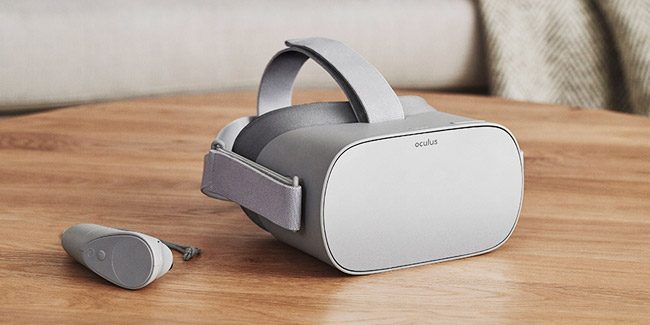 Just ahead of Facebook’s F8 developer conference today, it appears that the much-anticipated Oculus Go standalone virtual reality headset has already got a pre-order listing on Amazon, as retailers prepare for the imminent launch date to be announced today.

Staring at $199, the Oculus Go does not require a separate smartphone or PC to power the device. It is designed to be an “all-in-one“ headset that aims to make VR more accessible than ever. Currently, the Amazon listing advertises a release date of December 31st, 2018, however, this is likely just a temporary placeholder date.

The Oculus Go uses a “fast-switch” 2,560×1,440 LCD screen and will be powered by a Qualcomm Snapdragon 821 mobile processor. The headset will also be compatible with software developed for Gear VR, which means there will be more than 1,000 apps, games, and movies for users to experience and enjoy right out of the box.

Other major retailers appear to also be gearing up for the big launch of Oculus Go. In a post on Reddit, a user by the name of ‘theDarthonly’, shared a photo that revealed a stockpile of Oculus Go boxes locked behind a glass display case at a local Best Buy in Fayetteville, Arkansas, with some marked as either 32GB or 64GB storage capacity, as reported by Road to VR. It’s expected the 64GB model will be priced slightly higher than the $199 base 32GB model.

According to a separate report from UploadVR this morning, F8 attendees will also receive Oculus Go headsets for free at the event. An image posted earlier today on a public VR group page on Facebook shows a sign informing F8 attendees that they can pick up their own Oculus Go headset tomorrow May 2nd at the registration desk.

The Facebook F8 conference is taking place from May 1st-2nd, 2018 in San Jose in California, and the company is expected to announce more details on Oculus Go and its official release date later today.