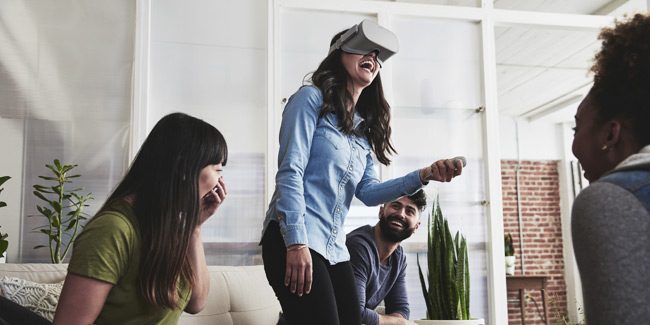 Oculus Go is an “all-in-one” VR headset that makes for a more seamless VR experience since it does not require a high-end smartphone, like the Samsung’s Gear VR, or a powerful PC to be tethered to, like Oculus’ high-end VR headset, the Oculus Rift. With the Oculus Go, you simply put it on and you enter into the virtual world.

The base model of the Oculus Go comes with 32GB of onboard storage and is priced at just $199, while the 64GB version is priced at $249. The Oculus Go is available to order directly from the official Oculus website in 23 countries, as well as online retailers like Amazon and Newegg, and from Best Buy stores.

The package includes the Oculus Go headset, a motion controller with a lanyard, power adapter, a USB cable, AA battery, lens cloth, and an eyeglasses spacer.

Oculus Go is designed with breathable fabrics to be lightweight and comfortable, which is especially important if you’re going to be wearing the headset for extended periods of time. There are three soft, flexible velcro straps that adjust the size across the top and sides of your head for the perfect fit. Oculus even went as far as making the top strap removed to accommodate different hairstyles.

The Oculus Go also features a solution for glasses wearers—a spacer insert, which allows you to wear eyeglasses comfortably with the headset. The company is also now offering an option to purchase prescription lens inserts, so you won’t need to wear glasses at all when using the Oculus Go.

Despite its affordable price, the Oculus Go features some pretty impressive specs. Oculus Go is powered by a Qualcomm Snapdragon 821 processor and uses next-generation fresnel lenses and a 538ppi 2560×1440 WQHD, “fast-switch” LCD display specifically optimized for VR, which dramatically improves visual clarity and reduces the screen door effect in which you can see the gaps between pixels. The display runs at 60Hz, but developers can push the screens to run at 72Hz depending on the experience, requiring more performance power at a higher frame rate but delivering noticeably enhanced brightness and colors.

Oculus Go also boasts built-in spatial audio and an integrated microphone. The speakers are built right into the headset so you don’t need to put anything over your ears in order to hear, which makes the headset convenient and easy to share with others at any moment without fussing around with any headphones, but Oculus does include a 3.5mm headset jack for when you want to use your own pair of headphones for private listening.

As for battery life, Oculus says that the headset’s internal 2600mAh Lithium-ion battery can provide between 2 to 2.5 hours of continuous video content or approximately 1.5 to 2 hours of battery life when gaming. It takes roughly 3 hours to fully charge the Oculus Go, and it’s worth noting that the instructions advise users not to charge the headset with other third-party chargers, including portable battery backups. Also, you should not charge the Go headset while you are still wearing it on your face.

The Oculus Go headset and controller offer three degrees of freedom (3DoF) tracking. This means that it can only track the direction you are looking in VR, and it does not have the ability to track when you lean, wander around or actually reach out and interact with virtual objects, which makes the headset most suitable for seated experiences.

While 3DoF may seem limited compared to the 6DoF you get with a high-end VR headset, like the Oculus Rift, it still offers an immersive experience at a very affordable price point that is geared towards a more casual audience.

The Oculus Go motion controller is a similar design to that used with Gear VR, but features a more refined and ergonomic shape in the hand—but it essentially functions exactly the same. The controller has a clickable touch-sensitive trackpad, a back button, a ‘Home’ button, and a trigger button on the rear. Unlike the headset itself, the controller is powered by a single AA battery and comes with a lanyard to secure it to your wrist during use.

Right out of the box, the Oculus Go will have over 1,000 apps, movies, games, and experiences available to choose from and enjoy. That’s because the new platform is compatible with the same library of apps and games developed for Samsung’s Gear VR, which is also powered by Oculus.

Social will be a significant part of the Oculus Go experience. The company has rolled out a revamped version of ‘Oculus Rooms’, which is a customizable virtual environment where you can hang out and invite your friends to play tabletop games, watch TV and movies, share photos, and even listen to music together. There is also the ‘Oculus Gallery’ app, which lets you stream photos and videos from your phone or social media accounts. In addition, the company is planning to launch two other brand new apps called ‘Oculus Venues’ and ‘Oculus TV’.

Oculus TV will be a 3D environment with a massive virtual screen and seating area, where you and your friends can gather around to watch live or on-demand content from partners like Netflix, Hulu, Showtime, Red Bull TV, Pluto TV, ESPN, and many others. In Oculus Venues users will get access to watch live concerts, standup comedy, sports, and other events with friends in virtual reality. Both Oculus Venues and Oculus TV will be available later this month.

Should I Buy an Oculus Go?

There is no doubt that the Oculus Go is a step forward for accessible, mobile virtual reality. It has the potential to really reach the masses with its impressive specs and relatively high-quality at an affordable price. While the experience will not be as advanced as what you would get on the Rift, the Oculus Go provides a portable, sleek, comfortable, and overall immersive experience that is possibly the best mobile VR you can get on the market to date.

If you’re looking to get into virtual reality without investing a ton of money, then the Oculus Go is certainly the mobile VR device worth getting that is capable of delivering a great immersive experience for the price.