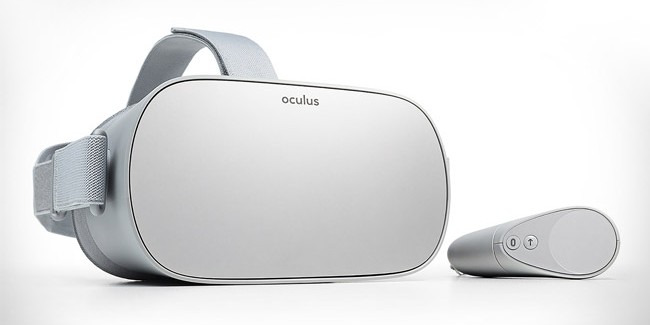 An image of what appears to be Oculus’ upcoming standalone VR headset, Oculus Go, has recently leaked across the internet, offering a sneak peek at what the retail packaging of the Oculus Go headset will most likely look like when it officially releases to consumers in coming weeks or months ahead.

As first reported by UploadVR, the leaked image, which was posted on Reddit, apparently shows off the finalized retail packaging for Oculus Go with a number of featured apps listed that it will support right out of the box including Netflix, Facebook, Hulu, The New York Times, Fox Sports VR, and Discovery VR. Some of the games and experiences also displayed on the box include Ultrawings, Ocean Rift, Anshar 2, Jurassic World, and The Body VR.

According to the box, the Oculus Go will have “1,000+ apps, games and movies” at launch, which is certainly an impressive amount of content for a newly released product on day one. This is made possible due to the fact that the Oculus Go is “binary compatible” with Samsung’s Oculus-powered Gear VR platform, which means that apps and experiences developed for the Gear VR will also work with the Oculus Go headset right out of the box.

In addition, the box points out that the headset is the 32GB model, which suggests that other versions of Oculus Go will be made available in various storage capacity configurations, as previously noted in the FCC filings. Currently, the Oculus Go standalone VR headset is expected to launch sometime in early 2018 and will cost as low as $199.