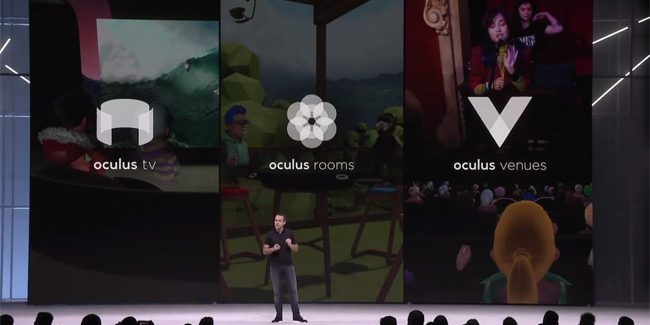 At Facebook’s F8 developer conference on Tuesday, Oculus announced the launch of its standalone VR headset, the Oculus Go, which has more than 1,000 apps and games now available on its platform. With Oculus Go, the company also introduced three flagship experiences for social entertainment in VR.

Originally released for Gear VR, the newly redesigned Oculus Rooms features a fully customizable environment, more life-like avatars, and the ability to watch full-length movies from among the hundreds of titles available in the Oculus Store. Oculus Rooms is a place where you can hang out with friends, interact, and enjoy fun social activities together in virtual reality.

The company also revealed that popular tabletop games from Hasbro like Boggle, Monopoly, and Trivial Pursuit will soon be making its way to the platform starting later this month.

Oculus is bringing the unique experience of being at live social events like concerts, sports, comedy shows, and movie screenings with the upcoming launch of Oculus Venues. The new app lets you watch live events and performances from around the world with friends and “thousands” of other people in virtual reality.

“It’s a great way to get closer to the things you love and connect with other fans while enjoying new perspectives or checking out the action from any angle,” the company said in an official blog post.

Oculus TV offers a brand-new way to experience and watch your favorite television shows in VR. The app puts you in a custom-built 3D environment with a massive screen and virtual seating area, where up to four people can gather around and watch shows together.

“You get this ginormous virtual TV in your living room that’s equivalent to a 180-inch screen in reality, and it works just like the best smart TVs out there,” said Barra during his keynote at F8. “Use the controller to change channels, navigate around, and choose between live and on-demand content. And starting this summer, you’ll be able to invite friends, cousins, and grandparents to have a watch party in VR wherever they are in the world.”