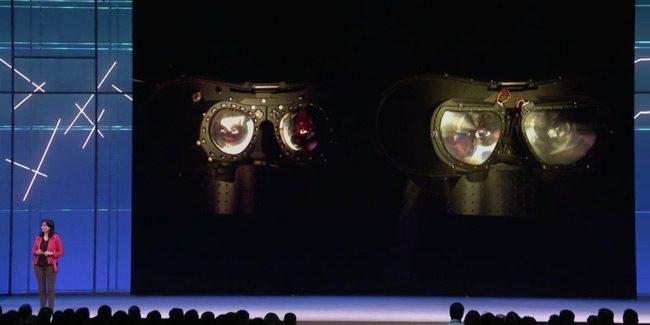 During Facebook’s F8 developer conference this week, Oculus unveiled a new prototype headset that the company has been working on internally, called ‘Half Dome’, which is a ‘Rift-like’ HMD that features some major advancements like a 140-degree field of view, varifocal displays, and what appears to be built-in eye-tracking technology involved as well.

Maria Fernandez Guajardo, Head of Product Management, Core Tech at Oculus, gave attendees at F8 a glimpse into how the ‘Half Dome’ prototype with its varifocal technology can dramatically improve the ability to focus on objects at different distances in virtual reality with far greater visual comfort and clarity than ever before.

This feat is achieved by incorporating a mechanical design in the headset that moves the lenses with sub-millimeter precision closer and farther away from the user’s eyes depending on what they are looking at in VR. Notably, the lenses can move without creating any noticeable vibrations or noise, which helps to not break the user’s sense of immersion in virtual reality while wearing the headset.

As for the field of view, the Oculus team managed to increase the FOV in the ‘Half Dome’ prototype to 140-degrees, which is an impressive improvement upon the 100-degree FOV that is typical of most VR headsets on the market today. “You can see the difference,” Fernandez Guajardo expressed to F8 attendees. On top of all that, Oculus’ continued innovation in lenses has allowed them to pack all this new technology without bulking up the headset and maintain the same form factor and weight as the current Rift headset.

The ‘Half Dome’ prototype headset is still very much in its early stages of development, so it will likely be quite some time before we actually see all these advanced technologies in a consumer product, however, it’s certainly exciting to see the direction Oculus is heading as we wait for next-generation of the Oculus Rift to be announced. Hopefully, we will learn more at Oculus Connect 5, which should take place later this year in Fall 2018.