Oculus HapticWave Project Let's You Feel in VR without Gloves 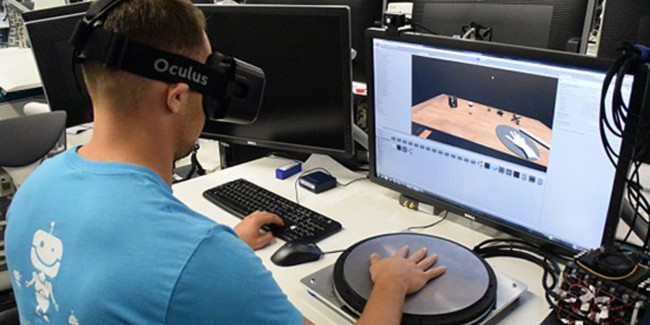 As Oculus gets closer to releasing its long-awaited Touch motion controllers to allow users to see their hands in the Rift, the company already has potential plans in the works to take VR input a step further to make virtual reality feel even more immersive.

According to a report by MIT Technology Review, researchers at Oculus are working on new hardware technology that will allow users to feel objects and experience the sensation of touch inside the virtual world. Oculus refers to it as HapticWave, which consists of a circular metal plate that is set on top of a ring of electromagnet actuators. As you place your hand on the center of the plate, the actuators then send vibrations to the hand, which in combination with 3D spatial audio enhances the perception that you are actually feeling a virtual object in VR—as well as, get a sense the direction the object is coming through key vibrational signals.

“Our hope around this project was being able to generate this extrasensory input so users can be more perceptive and more believable of virtual objects,” says Oculus Research Scientist Ravish Mehra.

Later this month, demos of the technology will be shown at SIGGRAPH 2016—the world’s largest, most influential annual event in computer graphics and interactive techniques.

While this innovative technology in haptic feedback seems quite promising, there is no word if, or even when Oculus may incorporate HapticWave with the Oculus Rift. As it stands, for now, this is all just experimental research.

Is the HTC Vive Really Outselling the Oculus Rift 2-to-1?