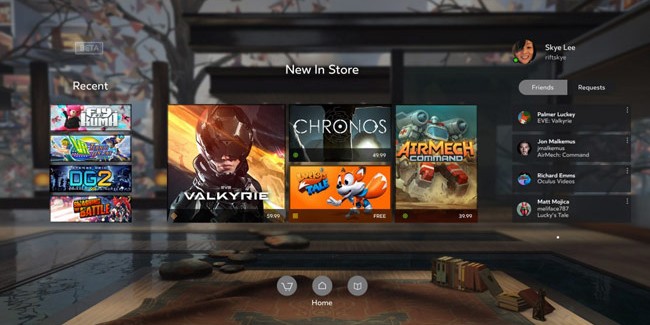 In this week’s latest software update to Samsung’s Gear VR, users are greeted with a revamped Home screen interface that is much more aesthetically designed to be in line with the look and feel of the Oculus Home experience that Rift owners are already quite familiar with on the Oculus Rift virtual reality headset.

The new version of Oculus Home on the Gear VR is an important update for the company as it continues to move closer to unifying both the mobile and higher-end PC experience across the entire Oculus platform. Back in 2014, Samsung partnered with Oculus to bring mobile VR to the masses, and so far the Gear VR has proven to be one of the most affordable and compelling VR products available on the market today.

As seen below in a video posted by Gear VR user Pablo Flores, the new changes offer a refined, spacious, and cleaner interface design, which will allow users a more efficient way to access and search for content on the Gear VR. However, while it still appears there is no “friends” section implemented, it’s safe to expect Oculus will continue to roll out additional software features that will help improve the overall experience of the Gear VR over time.

The new Gear VR interface is a much welcome update for all users, and will surely offer a consistent user-friendly experience for people who own both the Gear VR and a Rift headset.