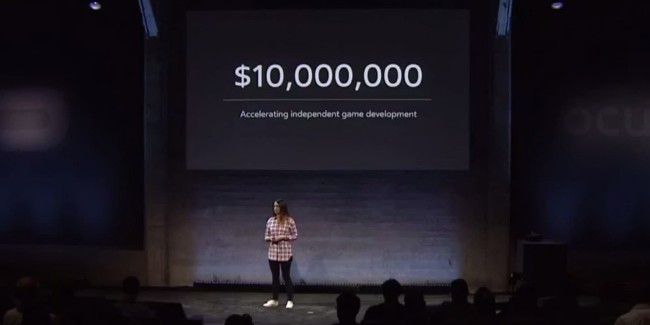 With the consumer version of the Rift set to release in Q1 2016, Oculus is ensuring a wide selection of innovative VR games, and experiences are made available on the Oculus platform.

Oculus announced a pledge of $10 million to help support indie game developers to create more virtual reality content for the Oculus Rift. Anna Sweet, Head of Developer Strategy, made the announcement on stage during the pre-E3 press conference on Thursday, saying the investment would go towards funding and accelerating the development of “innovative, one of a kind, independent games on the Rift.”

“Virtual reality is going to inspire a whole new generation of game developers, and at Oculus we’re committed to building the best platform for VR games,” said Sweet. “That means supporting established studios, small independent teams, and everyone in between…with the Rift anyone can be a creator.”

The investment is a key component of Oculus’ overall VR content strategy, and will hopefully encourage more independent game developers from around the world to continue to support and develop for the Rift.