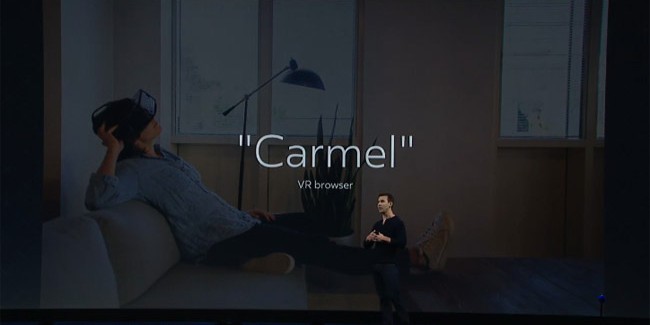 During the Oculus Connect 3 keynote, Oculus’ VP of Product Nate Mitchell announced that the company is working on building a new VR web browser, codenamed ‘Carmel’ along with a new JavaScript framework called React VR.

‘Carmel’ and React VR will allow web developers a way to easily build and share “simple” web-based VR experiences without the need for long downloads or requiring to install applications from the Oculus Home store. Anyone familiar with navigating to a URL web address will be able to view and experience exciting new VR content with their headset, as well as on a computer or mobile phone.

“This is going to lead to an exponential growth in VR content out there,” said Mitchell. “Everyone in the future is going to have their own VR destination on the web.“

On stage, Mitchell introduced examples of the kind of experiences developers can build using WebVR technology—which is an evolving industry standard that interfaces VR devices with browsers. According to Mitchell, some of these projects could be completed in just a few days, such as a 360-degree photosphere site, or something a bit more interactive like touring the inside of a new car with all its bells and whistles.

Carmel is still currently in its early stages of development, however, a developer preview is said to be “coming very soon” with React VR alongside it. Stay tuned for more details and the latest updates, as it develops.

Oculus Platform Gets Social with ‘Avatars’, ‘Parties’ and ‘Rooms’