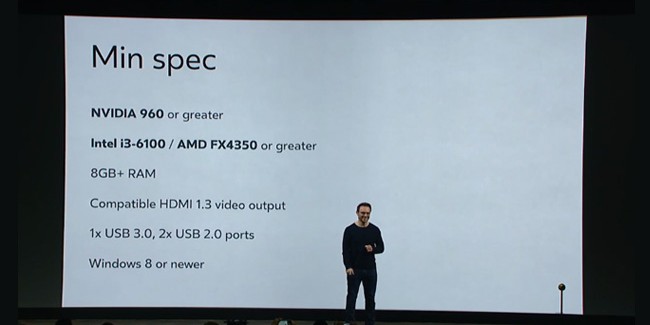 During the Oculus Connect 3 developer conference, Oculus CEO Brendan Iribe announced a new, lower minimum PC spec requirement for using the Oculus Rift headset, a move that will likely allow a much wider audience to experience PC-based VR at a lower price.

Back in March when the Oculus Rift first launched, the cost of entry for a VR-ready PC was around the $900 range requiring a quad-core Intel Core i5 chip and powerful GTX 970 graphics card to power the Rift. Since then, thanks to some new engineering techniques and advancements in the Oculus software the Rift will now support a PC running on a cheaper dual-core Intel Core i3 processor and an Nvidia GTX 960 graphics card.

Iribe announced that one of its partners, Cyberpower PC, is offering an Oculus-ready PC that features an AMD FX-4350 CPU and RX 470 GPU for as low as $499.

Oculus’ new lowered minimum specs are particularly due to a new technology called Asynchronous Spacewarp (ASW). This technology is a new technique implemented into the Oculus runtime, much like their existing Asynchronous Timewarp (ATW) technology, which helps to reduce judder and deliver consistent low latency by creating synthetic frames whenever necessary to avoid a game or application from experiencing framerate issues.

However, according to Iribe even though Timewarp works great to eliminate judder based on the user’s head movements or orientation, it’s “not a silver bullet”. ATW does not fix dropped framerate issues caused by a user’s positional movement, and this is where the magic of Asynchronous Spacewarp (ASW) kicks in.

Essentially, Asynchronous Spacewarp takes the two previous frames generated by the application, analyzes the difference, and then calculates the spatial transformation in order to extrapolate and generate a new synthetic frame. This allows the action to run at an internal 45 frames per second, while the synthetic frames fill the gaps in-between every other frame to still keep a smooth 90 frames per second and free up system bandwidth, which provides a VR experience without positional judder or ghosting images displayed to the Rift.

As a result of the reduced workload, you won’t need as much graphical or CPU horsepower performance as before to enjoy a quality VR experience on the Oculus Rift. However, Iribe makes it clear that while there is no replacement for native 90-hertz rendering, ASW does make it much easier for lower-end, affordable machines to power VR for the masses–it’s a significant breakthrough.

Disney and ‘Blade Runner 2049’ is Coming to the Oculus Platform