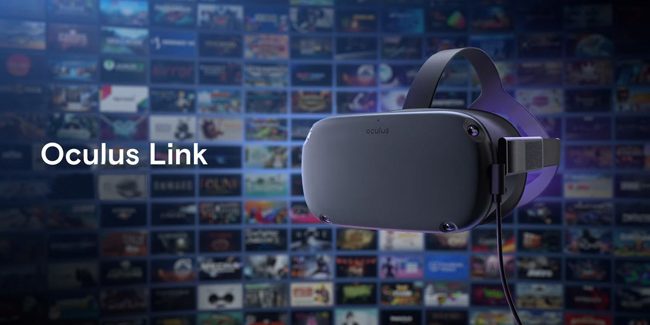 Oculus has announced that the beta version of its highly-anticipated Oculus Link software is now available, which will allow Quest owners to access the entire library of the Rift titles on a VR-ready PC.

With Oculus Link, Quest owners will be able to simply connect their Quest standalone headset to a compatible PC via a USB-C cable and then use the Oculus desktop app to browse and purchase Rift content and play and experience AAA PC VR games designed for the Oculus Rift like Asgard’s Wrath and Stormland on Quest.

“As the VR ecosystem grows, developers continue to push the boundaries of what’s possible by leveraging the full power of a gaming PC on Rift. And while Rift S offers the highest-fidelity gaming experience available, Oculus Quest is making it easier to get into VR than ever before. Oculus Link adds new depth and breadth to the experiences you can have with Quest while also helping PC developers reach the broadest possible audience for their work,” the official Oculus blog post states.

According to Oculus, the Link software will work with most high-quality USB 3 cables, and the company says it will release its own premium five-meter (16+ feet) custom optical fiber Link cable to provide a “best-in-class experience with maximum throughput while using Oculus Link” later this year.

Oculus has also released the specifications for the Oculus Link headset cable to help the VR community be informed on purchasing proper cables and let other companies make third-party cables that meet the official Oculus standard.

Alongside the Oculus Link software, the latest update for Oculus’ standalone headset also includes improved search as well as a new feature that lets users change their virtual environment while in Quest Home.