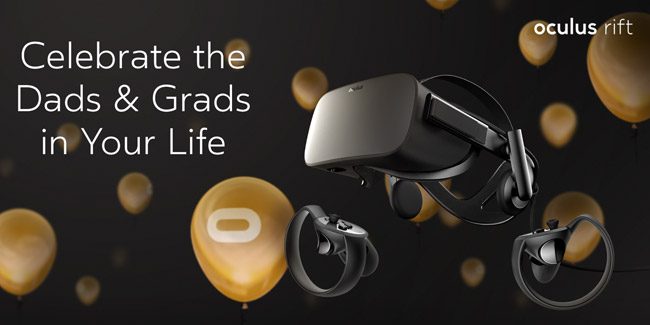 Looking to pick up an Oculus Rift for a loved one this Father’s Day or even as a graduation gift? Oculus is offering $75 in Oculus Store credit for ‘Dads & Grads’ with every new Rift purchased from Oculus, making this the perfect time to give the gift of VR.

The Oculus Rift currently priced at $399 offers one of the best values on the market for a high-end, immersive PC VR experience. The Rift headset comes bundled with a pair of Touch motion controllers, two Oculus sensors, alongside seven free titles—including Lucky’s Tale, Medium, Toybox, Quill, Dead and Buried, Dragon Front, and Robo Recall. So, getting that $75 in-store credit means you’ll be able to build your library with plenty more games for free in addition to the seven free titles that come with the bundle.

Oculus says its ‘Dads & Grads’ deal will run for a limited time now through 11:59 pm PT on June 16th. With hundreds of high-quality and immersive titles to choose from in the Oculus Store ranging from sci-fi shooters and classic board games to bass fishing and competitive poker, there is something for every kind of player to enjoy on the Rift.

To take advantage of this special offer, simply order the Rift from Oculus’ official website, and you’ll receive your $75 worth of credit that you can use to buy any games and apps you want directly from the Oculus Store.

Several other authorized retailers also have similar promotions going on to celebrate ‘Dads and Grads’ this season, however, details and availability vary, so be sure to check with your local store for the latest on deals they may offer.