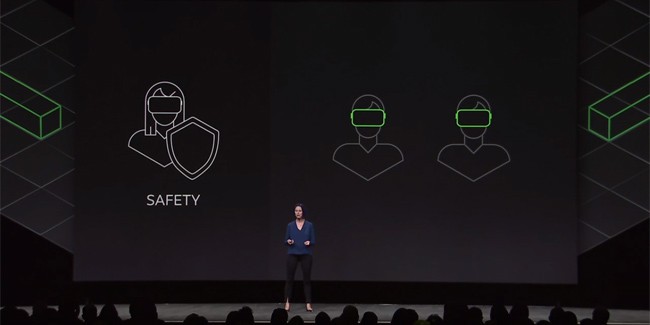 Oculus’ parent company Facebook wants to put one billion people into virtual reality. It’s certainly an ambitious goal that not only requires a platform that will provide users with incredible immersive experiences, but also one that allows users to feel safe and secure when inside of the virtual world.

During the Oculus Connect 4 keynote earlier this week, Product manager at Oculus, Christina Womack, announced that the company will introduce platform-level safety tools into its Rooms API early next year, so that developers can start to incorporate key safety features, like blocking and reporting, into their games and applications for free.

“For communities to thrive, people need to feel safe—and it costs developers a lot of money and time and effort to build and maintain safe places,” Womack said. “We care deeply about protecting the future of social VR. So we want to help. We decided to build an API that does a lot of it for you.”

According to Womack, Oculus’ new safety features will work seamlessly across different apps, which means, for example, if a user decides to block a person on one app, then they will also be automatically blocked on the other app that is powered by the same API. “It’s like, built-in best practices that carry app-to-app,” she noted.

In addition to the new safety tools, Womack also revealed the company’s plans to redesign its Oculus Avatars to look more natural and offer a wider variety of customizable options, allowing users to be able to express their unique style and personality through their avatars in VR. The new Avatars update will be released sometime in early 2018.

We’ll be sure to bring you further details on Oculus’ new safety tools and Avatars as it becomes available. Stay tuned!