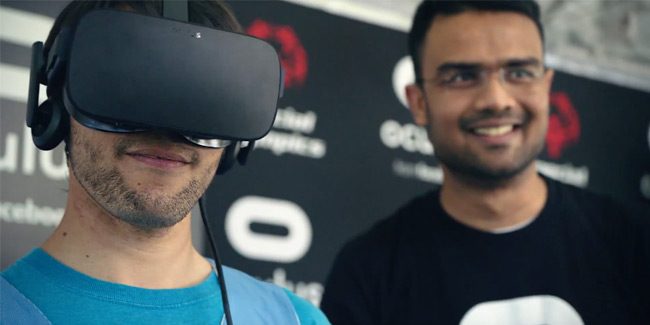 Oculus announced recently that it partnered with the Special Olympics this year to support more inclusive communities, as the company continues its ongoing commitment and effort to bring people together in VR, regardless of physical distance or ability to enable those to defy the limits of their own reality.

As part of the Special Olympics ‘Choose to Include’ campaign for its 50th Anniversary, Oculus and Special Olympics have teamed up to support more inclusivity by bringing the immersive power of Oculus Rift virtual reality headsets to Special Olympics events around the country, allowing athletes of all abilities to be able to experience shooting free throws on a virtual basketball court, throw touchdown passes into the end zone, and hitting home runs out of a stadium ballpark in VR Sports Challenge at Special Olympics regional events.

According to Oculus, the video will be shown on the big screen at any AMC Theater locations in the US this summer.

“At Oculus, we’re committed to bringing people together in VR, regardless of physical distance or ability,” the company said in a statement. “That’s why we’re honored and excited to support the Special Olympics #ChooseToInclude campaign for their 50th Anniversary.”

The Special Olympics is the world’s largest sports organization for people with intellectual disabilities and provides those in need with year-round competitions and training—serving more than five million athletes in over 172 countries, and over a million volunteers worldwide.

Be sure to check out the official Special Olympics website to learn more about the positive impact the organization has on the lives of people with intellectual disabilities, and discover the many ways you can get involved and donate.