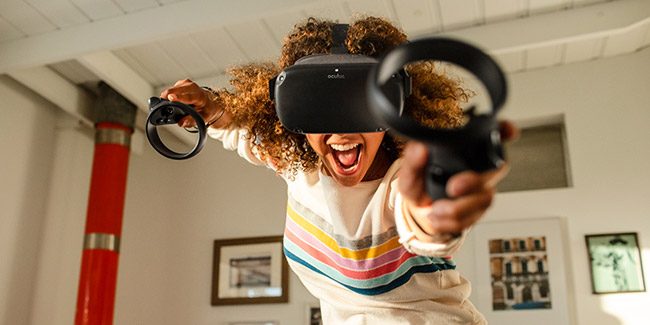 Oculus has announced a new update is rolling out across the Oculus Quest and Oculus Rift S, which brings several key improvements to both platforms—including a boost in controller tracking, new social features, and an improved Quest’s Guardian system.

According to Oculus, the improved Touch controller tracking algorithm promises to enhance the ability to accurately track more complex movements and poses, allowing for a much smoother tracking experience with fewer errors overall on both the Quest and Rift S platform.

“We’ve fine-tuned our Oculus Touch controller tracking algorithms to improve accuracy for certain poses, like when your hands are close to the headset or angled away from it,” the company wrote in an official blog post.

The Guardian system on Oculus Quest has also been much improved in the new update and makes it better at automatically recognizing multiple play spaces in different rooms. Also, it adds support for multiple Guardian setups for the same room, and the ability for the user to make any necessary adjustments to their playspace settings, such as the floor height, right from the Guardian settings page without having to start the entire process from scratch.

Oculus Venues, the social VR app that has previously been available on Oculus Go and Gear VR, has now finally made its way to the Oculus Quest. Venues allow users to get together with friends and connect with thousands of fans to watch live concerts, sporting events, stand-up comedy shows, movies, and more in VR. With the arrival of Venues on Quest today, the company kicks off its summer lineup of Oculus Venues content, which includes the Liverpool Football Club vs Sporting Clube de Portugal at Yankee Stadium and Tenacious D’s performance in the animated rock opera Post-Apocalypto. Venues, unfortunately, is not yet available on Rift.

As part of the new update, Oculus is also making it possible for users to switch on Passthrough+, indefinitely, as well as enabling users to link directly to their favorite games, experiences, and friend’s homes to Gateways. Users can find their Gateways listed in the Special Items section of their Oculus Home inventory. Additionally, Oculus has added a camera feature, so users can take photos of their virtual home space and even take selfies or group Avatar shots.