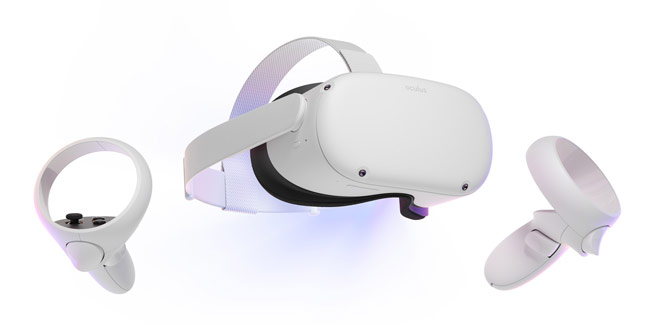 Today, at Facebook Connect, the company officially revealed the next iteration of the Oculus Quest standalone virtual reality headset, Quest 2, which is shipping next month starting at $299.

During the Facebook Connect keynote, CEO Mark Zuckerberg confirmed many of the details of the Quest 2 that have leaked over the past few months, along with some additional specs and the release date set for October 13th, with pre-orders open to everyone starting today via the Oculus website and other global retail partners.

The Oculus Quest 2 comes in two different models. The base variant with 64GB storage is priced at $299, which is $100 less than the original Quest. The other model features double the storage capacity with 256GB and retails for $399. The device itself is powered by Qualcomm’s Snapdragon XR2 chipset with 6GB of RAM, giving the new Quest 2 a significant boost in performance and speed over its predecessor. There’s also a new Fast-switch LCD display providing a resolution of 1832×1920 per-eye for a 50% increase in pixel density overall, as well as support for a 90Hz refresh rate coming soon after launch. For now, the current refresh rate will default to 72Hz as the original Quest, but a new opt-in experimental mode for 90Hz is available to run system applications like Oculus Home and the Browser.

While the lenses on the Quest 2 are the same as the original, the built-in IPD is now adjustable by moving the lenses inside the headset between three different physical settings—58mm, 63mm, and 68mm. These settings are based on the distance between a user’s pupils, allowing people to adjust the lens position for visual comfort and image clarity.

In terms of the Quest 2’s build quality, the new “all-in-one” standalone headset is slimmer and lighter compared to its predecessor. The Quest 2 weighs in at 503 grams, which is about 10% less than the original Quest. The Quest controllers also get an upgrade with improved ergonomics for comfort and even better battery life, which Oculus says will last up to four times longer than the original pair of Quest controllers.

Additionally, alongside Quest 2, the company revealed a line of official first-party accessories that can use the new headset. These include a $49 carry case and a $39 ‘Fit Pack,’ which comes with two interchangeable facial interfaces and light blockers to accommodate users with different face sizes. There is also an optional ‘Elite Strap’ for $49 designed to improve the overall weight balance and ergonomics of the Quest 2, and a version of the strap that features a built-in battery pack and comes with a carrying case for $129, which not only adds comfort but doubles the playtime in VR, too. And of course, the Oculus Link cable is available for $79 to connect the headset to a gaming PC.