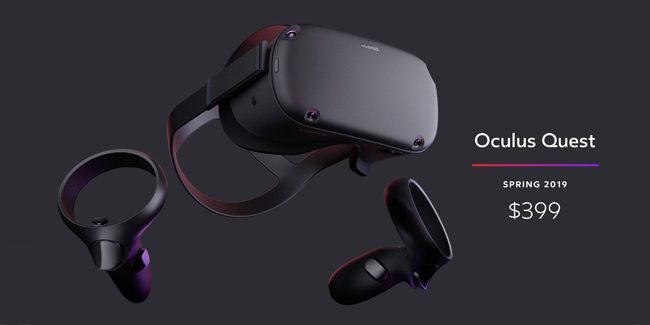 Today, Facebook CEO Mark Zuckerberg took to the stage at OC5 and announced that Oculus’ newest standalone headset, called Oculus Quest, will be released in Spring of 2019 at a $399 price point.

The Oculus Quest is officially the consumer version of what was previously codenamed, Project ‘Santa Cruz’, which the company had first introduced back in 2016. It is designed as an ‘all-in-one’ VR gaming system that uses motion controllers similar to Oculus Touch and includes four ultra-wide sensors to deliver 6DoF (six degrees of freedom) to provide positional tracking that lets users look around any direction and walk through virtual space just as they would in the physical world. Oculus Quest is said to support “Rift-quality” experiences and will have more than 50 titles to experience at launch, with even more in the works being developed specifically for Quest including existing popular Rift games like Robo Recall, The Climb, and Moss.

The company is calling its breakthrough 6DoF technology, ‘Oculus Insight’, which powers the inside-out tracking, Guardian, and Touch controller tracking of the Oculus Quest headset. Using four ultra wide-angle sensors combined with computer vision algorithms to track a user’s exact position in real-time, the setup is a tethered free-experience that requires no cables or PC and does not rely on any external sensors.

According to Oculus, the Oculus Quest will include “the same best-of-class optics” as Oculus Go with a display resolution of 1600×1440 per eye, while incorporating adjustable lens spacing to help maximize a user’s visual comfort. The headset will also feature integrated 360 audio, similar to Oculus Go, but with even “deeper bass” for a better, and overall higher-quality immersive sound.

The Oculus Quest will be the company’s most powerful standalone headset to date and represents a middle ground between the Oculus Go headset and the high-end Oculus Rift, which requires a PC.

“With Oculus Quest, we will finish our first generation of Oculus products,” said Zuckerberg. “From here we’re going to make some big leaps in tech and content for future generations of each of these products.”