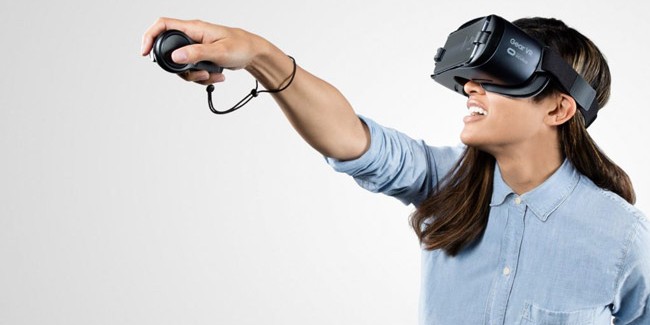 Samsung and Oculus have announced that the latest iteration of the Gear VR headset will be available starting April 21st for $129 and will come bundled with the new Gear VR controller. Current Gear VR owners can also purchase the controller separately for $39, which is compatible with older headset models.

The new Gear VR headset, as first unveiled at Mobile World Congress a month ago, remains essentially the same as the previous model the company released alongside the Galaxy Note 7 last year—with the exception that it comes in a new ‘orchid gray’ color option.

The new headset is not only compatible with Samsung’s latest flagship smartphone the Galaxy S8 and Galaxy S8+, but also supports the Galaxy S7, S7 Edge, Note 5, S6, and S6 Edge+.

As for the new Gear VR controller, it is designed to be used one-handed and aims to create a more compelling Gear VR experience by making it easier to interact with games and experiences on the mobile platform.

The controller takes two AAA batteries with a minimum battery life of 80 hours of usage and features an accelerometer, gyrometer, and magnetic sensors, as well as includes a clickable touchpad, trigger, dedicated home, volume, and back buttons.

In addition, Oculus will also be rolling out a vastly improved Oculus Home experience on the Gear VR with their “biggest mobile platform update yet,” which features reduced load times by up to 3x and sharper resolution. Oculus says it will have 70 new titles with controller support “coming soon” with nearly 20 titles to choose from in April when the new Gear VR with controller launches, and 50 more to follow over the next few months.