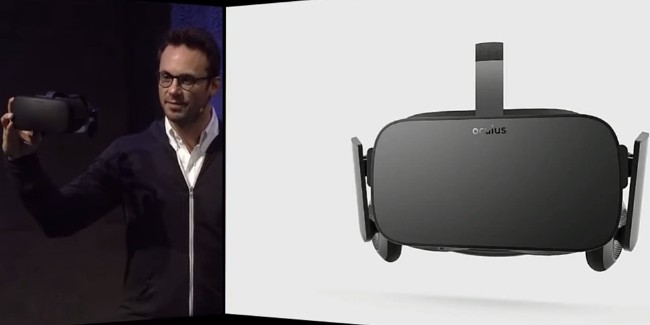 After three long years, the moment we have all been waiting for has finally arrived. Today, Oculus has revealed the consumer version of the Oculus Rift virtual reality headset to the world in all its glory.

“Oculus Rift is going to deliver the magic of presence,” said Oculus CEO Brendan Iribe at today’s special pre-E3 press event in San Francisco. “For the first time, we will finally be inside the game. This is going to change everything.”

The consumer Oculus Rift is a lightweight, ergonomic design wrapped in an all-black fabric material with new adjustments for better fit and comfort. It features two OLED displays that will deliver low persistence, with no motion blur, as well as, a wide field of view for total immersion. The headset also features a new constellation tracking system, which can precisely track the position of your movement with very low latency. There is also a new external sensor that simply plugs into the back of your computer, and is placed on your desk. The sensor works together with the constellation tracking to give users the feeling as if they are “instantly teleported” into the virtual world, says Iribe.

As previously seen on the Crescent Bay prototype, the consumer Rift also features its own integrated headphones that will provide a refined 360-degree spatial audio experience. Iribe points out the headphones are easily removable, so you can use your own.

The big news came when Iribe surprisingly announced a partnership with Microsoft to bundle an Xbox One controller and wireless PC adapter with every Oculus Rift headset. Xbox chief Phil Spencer said on stage the Rift will work natively on Windows 10, and will also stream Xbox One games directly into the headset for a unique VR experience.

The Rift is still confirmed for the first quarter of 2016, however, no official price has been announced yet.