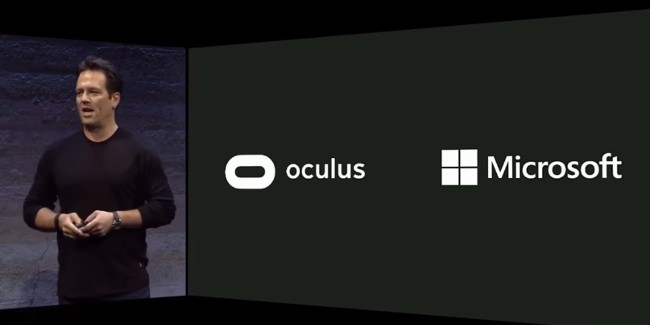 In a surprise announcement during the Oculus’ pre-E3 press conference, Oculus CEO Brendan Iribe revealed the company has partnered with Microsoft to bundle a wireless Xbox One controller and adapter with every Oculus Rift headset when its officially released to consumers in Q1 2016.

Phil Spencer, Microsoft’s Head of Xbox, took the stage to briefly explain what this close partnership between Microsoft and Oculus will mean for gamers, and how it benefits the world of virtual reality on top of the Windows platform.

“At Microsoft, we’re incredibly focused on making Windows a great operating system for gamers. And with Windows 10, partnering with Oculus to make it the very best operating system for Oculus Rift, we believe we will unlock the potential for millions of developers everywhere to create incredible virtual reality experiences,” said Spencer.

In addition to controller support, the Rift will natively work with Windows 10, and also offer users the ability to stream Xbox One games like Halo and Forza directly to the Oculus Rift headset. Spencer showed a short video demonstrating the game stream feature, which transports the user to a simulated virtual home theater, where they can play their Xbox One game on a large virtual cinema screen.

“We’re thrilled to be working closely with the team at Oculus. Their groundbreaking work in virtual reality is inspiring, and the Oculus Rift delivers a truly next-generation VR experience,” said Spencer. “We at Xbox are passionate about giving gamers the opportunity to play when and where they want. I can’t wait to see the incredible games created for the Rift, and we are proud to be part of the experience.”

The partnership is a big win for both companies, especially Microsoft as it allows them to focus on developing its own HoloLens augmented reality technology while leveraging its alliance with Oculus to compete in the VR space against Sony’s upcoming Project Morpheus for the PS4.