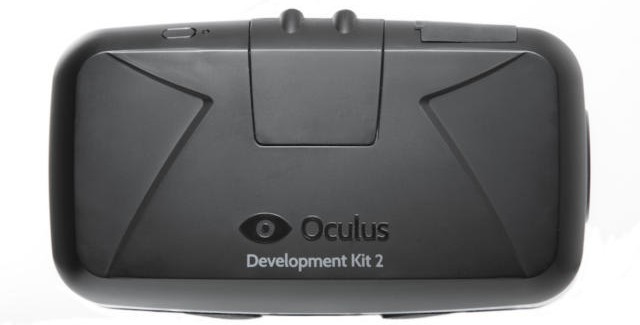 Within hours after Sony unveiled their own virtual reality headset prototype, codenamed Project Morpheus, Oculus VR did not hesitate to announce that their new and improved second-generation Oculus Rift development kit, simply referred to as “DK2″—is now available for pre-order for $350 and is expected to ship in July of this year.

The Oculus Rift DK2 (Development Kit 2) is a huge leap forward compared to the previous model. DK2 implements and improves upon many of the similar features from the ‘Crystal Cove’ prototype that was originally shown at CES 2014 in January. One of the significant improvements in DK2 is low-persistence technology and a higher-resolution 960×1080 OLED display (per eye) to eliminate motion blur and judder, known for the causes of simulator sickness.

The DK2 with its fairly lightweight, more refined, and smaller design, also features a 100-degree field of view, 75 Hz optical refresh rate, and low-latency positional head tracking that utilizes 40 infrared LED sensors hidden underneath the front black plastic housing. A custom-built external camera comes bundled with DK2, which is placed facing the user to receive data signals transmitted from the LED sensors. The combination of the LED sensors and external camera, according to Oculus, allows you to “move with 6-degrees-of-freedom and opens up all sorts of new gameplay opportunities like peering around corners, leaning in to get a closer look at objects in the world, and kicking back on a virtual beach.”

Oculus makes it clear that the “DK2 isn’t identical to the consumer Rift, but the fundamental building blocks for great VR are there.” And while the overall experience still needs to be improved before a consumer version of the Rift is ready for release, the advancements Oculus is achieving through their development brings them closer each day.

You can pre-order the Oculus Rift Development kit 2 today at the Oculus website. Stay tuned for more updates soon.