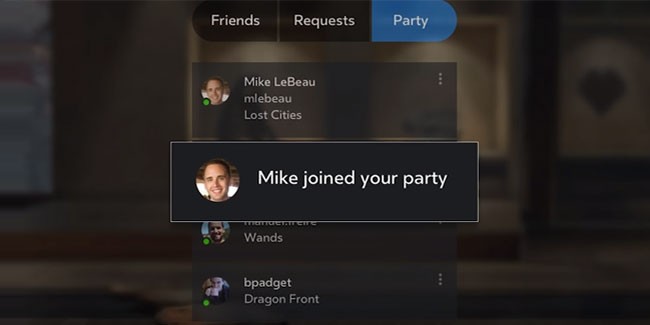 Oculus has announced that it started rolling out a long-awaited new feature called ‘Parties’ to its Public Test Channel for the Rift. This new feature for Rift owners will currently support up to four people to better connect and communicate with one another across VR apps on the Oculus platform.

According to a forum post on the Oculus’ website, the company explained the latest update for the Rift. stating:

“Today we’re rolling out an update to PublicTest that includes a new feature: Parties for Rift, so you can talk live with friends. In Oculus Home or Universal Menu, you can select a friend and choose ‘Invite to Party.’ Friends in your party can chat with you across Rift apps, or wherever you go in VR. Each party can support a total of four people at a time and each person must have the PublicTest build installed to use Parties on Rift. Access to Parties will be rolling out gradually over the next twenty-four hours, so if you don’t see it right away, be patient.”

The Parties for the Rift feature is part of Oculus’ upcoming 1.17 software update, which includes some other major improvements to the platform—such as the ability for users to view, manage and launch compatible content acquired from outside the Oculus Store directly from within Oculus Home.

For anyone interested in testing out this new feature, you can simply do so by enrolling into the Public Test Channel by going to the Beta section of the Oculus app under Settings. Now with Parties coming to the Rift, this is just another step forward in an effort to greatly enhance the social VR experience on the Oculus platform.