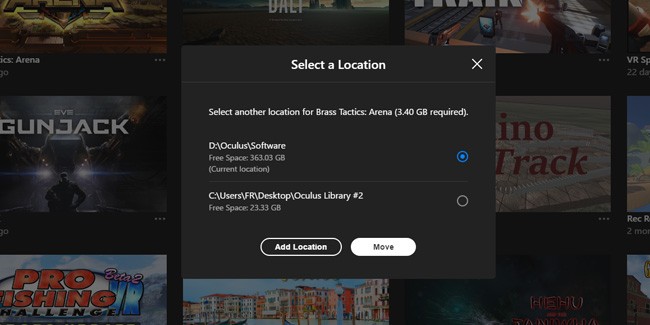 Oculus announced that it has started rolling out its latest Rift 1.24 software update, which includes a number of performance improvements and bug fixes to Rift Core 2.0, and adds a new feature that allows users to move installed applications from one Oculus library location to another.

Having the ability to easily move and manage the content in your Oculus library is a much-welcomed feature. Prior to this latest update, any pre-installed application that you wanted to move from one library to another required that you first uninstall the app, and then re-download it to the new desired location. Now, any user on the Oculus platform can benefit from this new feature, even if they are not enrolled in the Rift Core 2.0 beta.

To move content from one library to another, you can do so by opening the Oculus Home software and then locate the application in your library that you wish to move. Click the ellipsis icon (…) to pop up the menu box, and there you will see a new option called ‘Move’. Select ‘Move’, and you will see listed the current location that your application is in, as well as any other libraries that you may have. There is also an ‘Add Location’ button for assigning additional libraries in case you need to set that up. Once you’re ready to move the application, you simply just select the new location from the list and then click on the ‘Move’ button to begin the transfer.

Here are the full release notes for the Rift 1.24 software update: