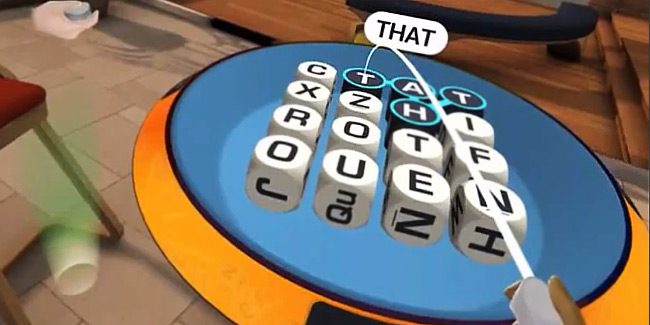 Oculus first announced that it partnered with Hasbro to start bringing several classic board games to the Oculus platform back at Facebook’s F8 developer conference. As of now, Boggle is Hasbro’s first game to officially arrive for free in Oculus Rooms, letting you play the popular word-finding game with up to four friends using Oculus Go or Gear VR headsets.

The launch of Hasbro’s Boggle is part of Oculus’ major revamped version of Oculus Rooms, which offers a fully customizable virtual hangout space for users to interact with friends and enjoy social activities together like watching TV and movies, sharing photos, listening to music, and playing fun tabletop games. Boggle is the first classic game from Hasbro now available to play in Oculus Rooms, with Monopoly and Trivial Pursuit said to be “coming soon.”

It's Boggle time! We teamed up with @HasbroNews to bring some beloved tabletop games to Oculus Rooms on #OculusGo and Gear VR. Starting today, you can challenge your friends to a battle of wits and words—with Monopoly and Trivial Pursuit coming soon! pic.twitter.com/OMOoM7cduN

Boggle offers the same gameplay you would expect from the real-world version, but now you can share in all the fun with friends and family in virtual reality.