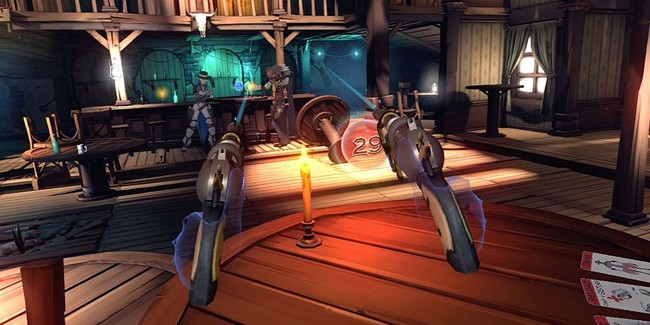 The Oculus Touch motion controllers for Oculus Rift is due to launch in December, and consumers can look forward to another exciting first-party VR title to come free with the Oculus Touch.

Dead and Buried, the highly-anticipated multiplayer first-person VR shooter, developed by Oculus Studios and Gunfire Games is officially announced to join alongside VR Sports Challenge and The Unspoken as free-bundled launch titles to Touch owners at launch.

In Dead and Buried, players will gun sling their way through an old-fashioned saloon set in the Wild West with an arsenal of weaponry like pistols, shotguns, grenade launchers, and more in a variety of game modes—including a shooting gallery mode for single-player practice, multiplayer, and co-op modes. There is also a new Robbery mode, where one team tries to rob a train while the other attempts to stop them in their tracks. The result is a frenetic, competitive VR shootout experience designed to take full advantage of the unique Touch controller capabilities.

As a free exclusive title when your purchase the Oculus Touch, Dead and Buried definitely highlights the potential of the hardware and technology and is a wise move by Oculus to include the game as free bonus content to early adopters ready to get their hands on a pair of Touch controllers to use with the Oculus Rift.

Oculus Touch is available now for pre-order and start shipping on December 6th.

Oculus Sensors Pre-orders on Sale for $79, Ships in December