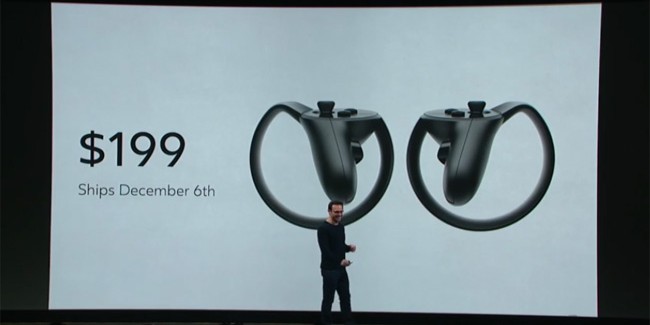 Finally, Oculus today announced during a keynote speech at the Oculus Connect 3 developer conference the official price and shipping date of its Oculus Touch motion controllers for the Oculus Rift.

The Touch controllers will cost $199 and will begin shipping to consumers hands-on December 6th. Pre-orders for Touch will also be available on October 10th online and in retail stores.

The Touch will come bundled with a second camera sensor to enhance its tracking capabilities around the user, as well as, include two Touch-supported games with all pre-orders: VR Sports Challenge and The Unspoken.

The long-awaited Touch controllers will allow users to naturally control and experience the virtual world with their hands—allowing for intuitive actions, like finger gestures for communicating with others, picking up objects, and having the sense of feeling them in VR.

Oculus also announced that the Oculus Touch controllers will support “room-scale” VR, which will allow Rift users the option to walk around within a designated play area that is tracked with the use of a third sensor sold separately. Extra Oculus sensors will be available for $79 starting on December 6th, as well.

With the upcoming release of Oculus Touch controllers and additional sensors to usher in room-scale capabilities for the Oculus Rift, the complete set will offer Rift users a more immersive VR experience than ever was possible on the platform before.