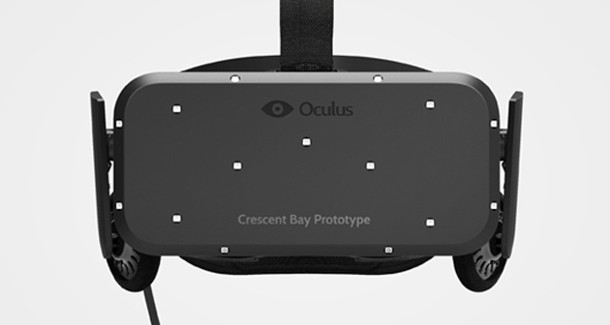 The Crescent Bay prototype brings us one step closer to the consumer version of the Rift with superior improvements over the current DK2 model. These key features include new LEDs integrated into the back of the headset for full 360-degree motion head tracking, improved optics, a higher-resolution OLED display, and a higher refresh rate. The new headset is also noticeably lighter than previous versions of the Rift and has an improved ergonomic design.

In addition, Oculus also integrated high-quality audio hardware directly to the headset and licensed VisiSonics Realspace 3-D technology from the University of Maryland to deliver quality 3-D positional audio. The built-in headphones does, however, have the option to be removed allowing the ability to use your own headsets if you prefer. “We are working on audio as aggressively as we are on the vision side,” said Iribe.

Oculus has expressed the vital importance of delivering the best 3-D audio, alongside quality visuals, and positional tracking cues as an essential part in establishing a sense of sustained presence in virtual reality, and achieving a truly immersive VR experience.

According to Oculus VR, “This is still incredibly early hardware. There are plenty of technical challenges left to solve for the consumer Rift, but Crescent Bay is truly the best virtual reality headset we’ve ever built.”

While there is no official announcement on the consumer version of the Rift headset, it looks as though we are getting much closer. Stay tuned for more updates.